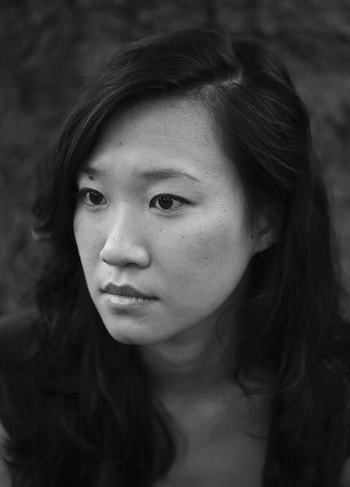 Jenny Xie was born in Hefei, China, and immigrated to the United States at the age of four. Her parents left China during Xie’s infancy when her father began a PhD in math at Rutgers University. After arriving in the US with her grandmother, the young Xie was raised in New Jersey, spending formative years in a graduate student housing complex in Piscataway with a thriving community of Chinese immigrants. She spoke Mandarin as her first language, but began to lose fluency as she learned English; her sense of alienation from both tongues is explored in her poetry.

Xie was drawn to reading and literature as a private route to meaning, contrasting the STEM-focused passions of the family and community she grew up in, and as an area ripe for play and exploration. An only child, she cherished her alone time as an opportunity to read freely, finding companionship in characters in novels and learning to tell herself stories to stay entertained. She began writing poetry in high school.

Xie earned a BA in English and a certificate in writing from Princeton University, where she was a Stein Fellow. After graduating, she traveled widely in Asia, teaching English in Hong Kong and working at an advertising firm in Phnom Penh, Cambodia. Upon returning to the US, Xie earned her MFA in poetry from New York University's Creative Writing Program. Her debut chapbook, Nowhere to Arrive, received the 2016 Drinking Gourd Prize and was published by Northwestern University Press in 2017. She drew on her years of travel for many of the poems in the chapbook, which explored themes of journeying, tourism, and isolation.

Eye Level, Xie’s full-length collection, was published by Graywolf in 2018. The book won numerous accolades, including the 2017 Walt Whitman Award of the Academy of American Poets, as selected by Juan Felipe Herrera, and the Holmes National Poetry Prize from Princeton University. Eye Level was also selected as a finalist for the National Book Award and PEN Open Book Award and longlisted for the Dylan Thomas Prize. Eye Level expands on the subject matter of Nowhere to Arrive, taking literal journeys as a launch point for a tour-de-force inquiry into perception and distance that incorporates language, heritage, and questions of solitude and belonging.

Xie’s poems appear in Poetry, American Poetry Review, Tin House, the New Republic, American Poets, and elsewhere. She has received fellowships from Kundiman, the Fine Arts Work Center in Provincetown, Civitella Ranieri Foundation, Bread Loaf Writers' Conference, New York Foundation for the Arts, and other institutions. In 2020, she was awarded the Vilcek Prize for Creative Promise in Literature. Xie has taught at Princeton and NYU and is currently on faculty at Bard College.

Text: Xie discusses her poem "Melancholia" at the Poetry Society of America

Video: A short film piece on Xie from the Vilcek Foundation