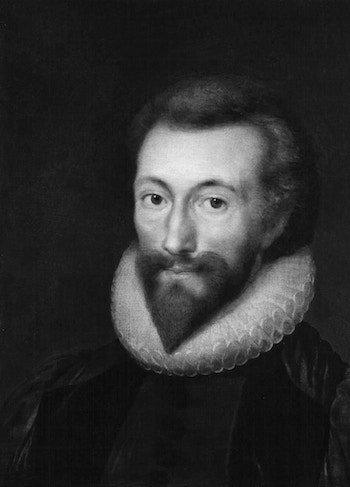 John Donne, first poet of the Metaphysical school, was born in London to a Catholic family, the third of six children. Donne’s father died when he was four years old, and his mother remarried soon thereafter, bringing a widower and three stepchildren into the family. This was the era of Anglican supremacy in England, so Catholicism was illegal to practice, which forced various privations on Donne and his family. Donne studied at Oxford and Cambridge but could not officially take a degree at either school due to his faith: he refused to swear the required Oath of Supremacy, which invoked the English monarch’s authority as head of the church. Around this time, Donne began questioning Catholicism, likely spurred by the death of his brother in prison after his arrest for harboring a Catholic priest. He converted to Anglicanism while still young.

After a stint in legal school, Donne spent several years adventuring: he traveled Europe, indulged in romantic pursuits, and fought with Sir Walter Raleigh in the Anglo-Spanish War. In 1597, he was appointed chief secretary to Sir Thomas Egerton, Lord Keeper of the Great Seal. Donne fell in love with and secretly married Egerton’s teenaged niece, Anne More, contrary to her uncle’s wishes—and to those of her father, George More, the powerful Lieutenant of the Tower. Donne was imprisoned for this offense, and though he was released quickly once the marriage proved valid, he lost his position, his income, and his budding career.

For the 16 years of their marriage, the Donnes and their eventual 10 surviving children lived in financial precarity. Their income streams included Donne’s meager earnings as a lawyer, occasional patronage for his poetry, side work that included printing anti-Catholic pamphlets, and support from Anne’s extended family. Donne also served, unpaid, as a local Member of Parliament. In 1615, at the urging of King James, Donne entered the Anglican ministry and became Royal Chaplain. Anne Donne died soon after, which threw her husband into deep mourning and left him to support their large brood alone. Donne served as minister at Lincoln’s Inn and as a chaplain overseas in Germany before being made Dean of St. Paul’s Cathedral, a high-ranking position in the Church of England that he would retain until his death. In this role, he delivered unusually eloquent and learned sermons, over 160 of which survive today, and wrote and published the religious prose work Devotions upon Emergent Occasions.

From Donne’s time in college until his death, he wrote poetry remarkable for its innovative syntax and rhythm, use of irony and paradox, and extended metaphors known as “conceits,” in styles spanning from love poetry and social satire to epigrams, elegies, and religious poetry. He was scantly published during his lifetime, primarily circulating his poetry in manuscript among his friends and admirers. After Donne’s death, however, several editions of his poems were published in succession, posthumously widening his influence and that of the small Metaphysical school. He fell out of favor again during the Restoration period, and his writings were largely forgotten until his rediscovery by modern poets like T. S. Eliot and W. B. Yeats brought them new attention. Since this return to the public eye, Donne’s verse has placed him firmly in the upper ranks of the English canon.

Text: Poet Linda Gregerson on Donne and the “delicious adventure” of his poetry

A Dialogue Between Sir Henry Wotton and Mr. Donne

A Hymn to God the Father

A Lecture upon the Shadow

A Nocturnal upon St. Lucy’s Day, Being the Shortest Day

A Valediction of My Name, in the Window

A Valediction of Weeping

Song: Sweetest love, I do not go

Valediction to His Book

Witchcraft by a Picture

[Another of the same]