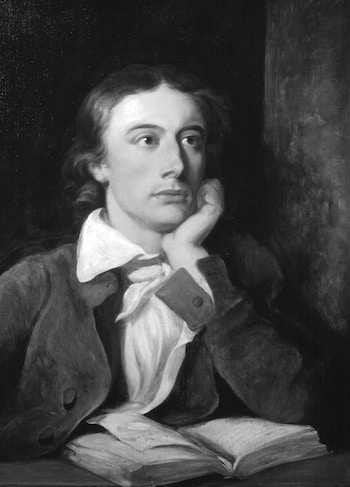 John Keats was born in London in 1795, the eldest of four children raised on the limited income of their stableman father. Faced with the early deaths of both parents, Keats threw himself into his education, finding especial resonance with the classics and the work of Edmund Spenser, the deep influences of both of which are seen in his later poetry. He befriended the headmaster’s son at his small academy, who introduced him to the radical magazine The Examiner and the tight literary circle around its influential editor, Leigh Hunt. This group included notables like the two other major members of the second generation of British Romantic poets, Lord Byron and Percy Shelley, the latter of whom became close with Keats.

Though he had already embarked on training as a doctor and apothecary, Keats’ time in this heady literary milieu stimulated a change in direction to a career as a poet. His first two volumes, Poems and Endymion, were scathingly criticized by the press, and only his third and final collection, Lamia, Isabella, The Eve of St. Agnes, and Other Poems, received general praise. Keats contracted tuberculosis in 1819 and died of the disease at age 25. The place he posthumously earned as one of the British canon’s greatest lyric poets was achieved through just 54 poems written in his six short years of poetic output.

Ode on a Grecian Urn

Ode to a Nightingale