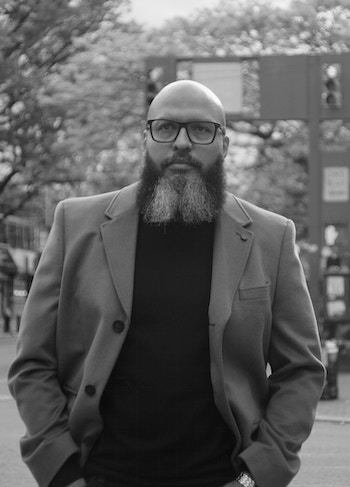 Poet and teacher John Murillo grew up in Los Angeles, the son of a Black father and Mexican mother. He wrote raps and freestyled as a teenager before venturing into writing essays, then determined to begin more focused work on his poetry in his mid-twenties. Murillo attended Howard University for his undergraduate degree. While living in Washington, D.C., he found mentors in two members of the Black Rooster Collective of poets, Brandon D. Johnson and Joel Dias Porter, who taught him how to revise. After years of working various jobs and only writing and reading in his limited free time, Murillo decided to build his life around poetry while in his early thirties. He received his MFA from New York University.

Up Jump the Boogie (Cypher Books, 2010), Murillo’s debut full-length, was a finalist for the Kate Tufts Discovery Award and the PEN Open Book Award. It was also deemed by The Huffington Post to be among their “Ten Recent Books of Poetry You Should Read Right Now.” His follow-up collection, Kontemporary Amerikan Poetry (Four Way Books), was published in 2020. A meditation on racism and institutional violence in America and their personal consequences, it won the Kingsley Tufts Poetry Award and the Poetry Society of Virginia’s North American Book Award and was a finalist for the 2021 PEN/Voelcker Awards.

Murillo counts Larry Levis, Yusef Komunyakaa, Philip Levine, Lucille Clifton, and Etheridge Knight among his early poetic interests. His poetry has appeared in American Poetry Review, Ploughshares, Poetry, and Prairie Schooner, as well as Best American Poetry 2017, 2019, and 2020 and Angles of Ascent: A Norton Anthology of African American Poetry. In the past, he has taught at Hampshire College and NYU. Murillo is currently an assistant professor of English and creative writing program director at Wesleyan University. He also teaches at Sierra Nevada College’s low-residency MFA program. He lives in Brooklyn, New York, with his wife, the poet Nicole Sealey.

Audio: Murillo appears on the Poetry Foundation's VS Podcast

from A Refusal to Mourn the Deaths, by Gunfire, of Three Men in Brooklyn

Poem Ending and Beginning on Lines by Larry Levis

Variation on a Theme by Elizabeth Bishop