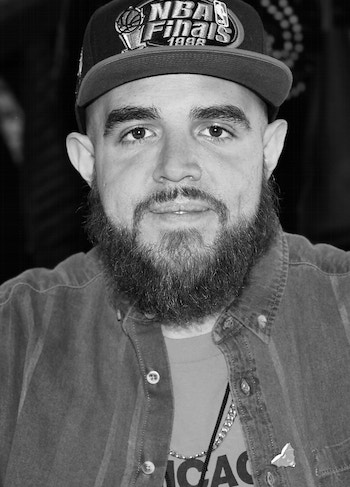 The son of Mexican immigrants, José Olivarez was born and raised in Calumet City, Illinois. He earned his BA from Harvard University. His debut poetry collection, Citizen Illegal (Haymarket Books, 2018), was a winner of the 2018 Chicago Review of Books Poetry Prize and a finalist for the PEN/Jean Stein Award. It was also named one of 2018’s best books by The Adroit Journal, NPR, and the New York Public Library.

Olivarez’s writing has appeared in The New York Times, The Paris Review, Poetry, and many other publications. He is the recipient of fellowships from CantoMundo, Poets House, the Bronx Council on the Arts, and the Conversation Literary Festival. He co-edited the poetry anthology The BreakBeat Poets Vol. 4: LatiNext (Haymarket Books, 2020) with Felicia Chavez and Willie Perdomo. In 2018, Olivarez was awarded the inaugural Author and Artist in Justice Award from the Phillips Brooks House Association and was named a Debut Poet of 2018 by Poets & Writers. He won a Ruth Lilly and Dorothy Sargent Rosenberg Poetry Fellowship from the Poetry Foundation in 2019. The co-host of podcast The Poetry Gods, Olivarez lives in New York City.

My Mom Texts Me for the Millionth Time