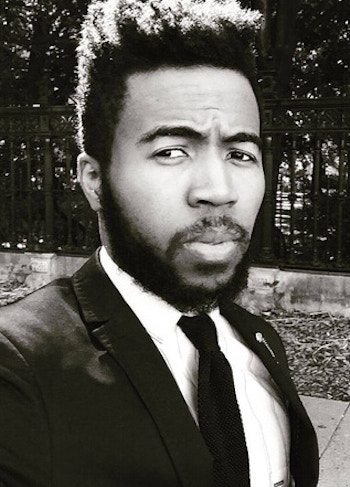 Poet, educator, performer, and scholar Dr. Joshua Bennett was born and raised in a working-class black family in Yonkers, New York, in a primarily Latinx neighborhood not far from the Bronx. His interest in spoken word performance began when he was still a child; at home after church on Sundays, he would deliver his own rendition of the week's sermon. At 14, Bennett's evident talent won him a scholarship to an elite private high school on the other side of the county, where he was one of just a handful of black students. Obliged to commute two hours to school each way by bus and train, Bennett spent his time in transit reading and rereading Cornel West’s Race Matters. West’s provocative, stimulating essays on race in the United States awakened in the young man a desire to become a professor himself. Around this time, Bennett also attended an Urban Word NYC event where Aja Monet, Carlos Andrés Gómez, and others performed. There, he first witnessed the power of combined performance and poetry, which would become a second driving interest inextricable from the first.

Bennett attended the University of Pennsylvania, where he double-majored in Africana Studies and English. He performed at local slams frequently, and his win as part of “Team Philadelphia” at the 2007 Brave New Voices Youth Poetry Slam brought him national attention. In 2009, he was invited to perform for the First Family at the White House, where he read his poem “Tamara’s Opus,” exploring his relationship with his deaf older sister. At Penn, Bennett achieved both Phi Beta Kappa and magna cum laude distinctions and delivered his class’s commencement address. Next, he went on to an M.A. in Theatre and Performance Studies from the University of Warwick, where he was a Marshall Scholar, then a Ph.D. in English from Princeton University.

Already highly regarded as a slam poet, Bennett soon found equal success on the page. His debut full-length poetry collection, The Sobbing School (Penguin, 2016), was selected by Eugene Gloria as the winner of the 2015 National Poetry Series and named an NAACP Image Award finalist. Much of the book was written in the months after Mike Brown’s killing in Ferguson, Missouri, and its poems accordingly grapple with the violence and artificial binaries of race in America. In 2020, he published a second poetry collection, Owed (Penguin), and the academic monograph Being Property Once Myself: Blackness and the End of Man (Harvard University Press), a winner of the Thomas J. Wilson Memorial Prize. Bennett’s refusal to silo his twin public identities as scholar and poet shines through in his language, as well as in nods like his choice of a Lucille Clifton poem quote to title his scholarly work.

Bennett’s writing has appeared in The Nation, The New York Times, The Paris Review, Poetry, American Poetry Review, and elsewhere, and he has performed at venues including the Sundance Film Festival, the Clinton Global Citizen Awards, and the NAACP Image Awards. He has received fellowships from the National Endowment for the Arts, the Massachusetts Institute of Technology, the Society of Fellows at Harvard University, and the Ford Foundation, as well as Cave Canem and the Callaloo Creative Writing Workshop. He directed the June Jordan Fellowship at Columbia University and is an Associate Editor at Callaloo. Bennett is currently the Mellon Assistant Professor of English and Creative Writing at Dartmouth College. His nonfiction book Spoken Word: A Cultural History is forthcoming from Knopf in 2021. He lives in Boston.

Video: Bennett on the history of spoken word poetry

10 Things I Want To Say to a Black Woman

Owed to the Durag