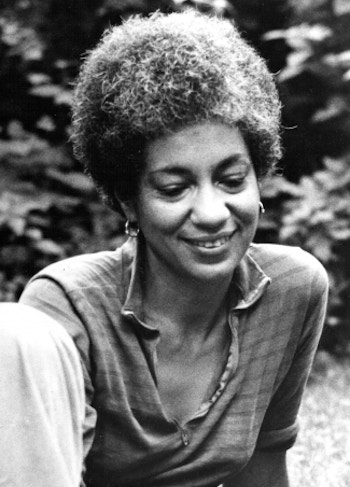 Poet, activist, educator, and essayist June Jordan was born in Harlem, New York City, in 1936. An only child, she was raised by her Jamaican immigrant parents in Brooklyn’s Bedford-Stuyvesant neighborhood. She began writing poetry at only seven years old. Jordan attended high school at the Northfield School for Girls in Massachusetts and university at Barnard College, which she left without a final degree due to her alienation from the strictly white and male literary curriculum there. She married and later divorced Columbia student Michael Meyer, with whom she had one child. Despite anti-LGTBQ+ stigma at the time, Jordan’s writing openly acknowledged her bisexuality.

The author of 27 books—including essay collections, libretti, and children’s books as well as volumes of poetry—Jordan was also a lifelong activist who fought fiercely for civil rights, women’s rights, LGBTQ+ rights, and anti-war causes. She taught at CUNY’s City College, Yale University, Sarah Lawrence College, and SUNY Stony Brook before being appointed professor of African-American Studies at the University of California, Berkeley, where she founded Poetry for the People. Jordan’s many accolades include grants and awards from the Rockefeller Foundation, the National Endowment for the Arts, PEN America, the National Association of Black Journalists, and numerous other institutions. She died of breast cancer in 2002. A widely influential poet who worked in accessible language to convey deep truths around identity, Jordan is celebrated today for both her literary writing and her dedicated advocacy for social justice and historically excluded groups.

Nobody Riding the Roads Today