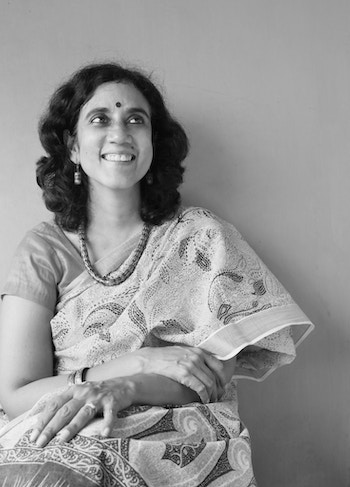 K. Srilata, also known as Srilata Krishnan, is a poet, fiction writer, and professor of English at IIT Madras. She moved from Kanpur to Chennai, historically called Madras, with her mother and her grandparents in the early seventies. Her mother, having walked out of an abusive marriage, taught her to think independently.

K. Srilata has published five collections of poetry, the most recent of which, The Unmistakable Presence of Absent Humans, was published by Poetrywala in 2019. Her other poetry books include Bookmarking the Oasis, Writing Octopus, Arriving Shortly, and Seablue Child. Her novel, Table for Four, was longlisted for the Man Asian Literary Prize in 2009. She has translated two novels by the Tamil writer Vatsala and has co-edited multiple anthologies, such as Rapids of a Great River: The Penguin Book of Tamil Poetry, Short Fiction from South India, All the Worlds Between, and Lifescapes: Interviews with Contemporary Women Writers from Tamilnadu. K. Srilata’s poem “In Santa Cruz, Diagnosed Home Sick” won the First Prize in the All India Poetry Competition. She has held the role of writer in residence at the University of Stirling, Scotland; Yeonhui Art Space, Seoul; and Sangam House, Bangaluru. She is currently at work on a series of poems inspired by the Mahabharata.