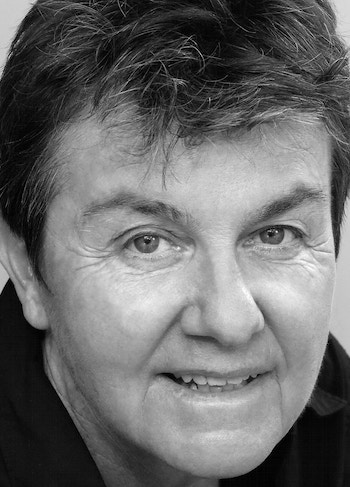 Poet and educator Kay Ryan was born in San Jose, California, to a teacher mother and a father who bounced between jobs ranging from rancher to oil driller to chromium miner. She and her older brother grew up in towns across the San Joaquin Valley and Mojave Desert until her family landed in Rosamond, a small town in the Mojave’s Antelope Valley. Ryan studied at Antelope Valley College, then transferred to the University of California, Los Angeles, where she received bachelor’s and master’s degrees in English. She began but ultimately left a Ph.D. program at nearby UC Irvine, then returned to teach there.

Although she began writing poems at age 19 when her father died, it wasn’t until 1976 that Ryan fully acceded to her vocation as a poet. While on a 4,000-mile solo bicycle trip along the West Coast, a moment of clarity struck: she realized that writing brought her “pleasure like nothing else.” Aware that she had far to go, Ryan began a rigorous eight-year self-apprenticeship during which she developed her writing with daily practice, taking as inspiration sources as disparate as tarot and Ripley’s Believe It or Not! books. Soon after embarking on this regimen, she met her partner Carol Adair, who would be her booster and primary reader until Adair’s death in 2009.

Ryan’s first collection, Dragon Acts to Dragon Ends, was privately published in 1983, followed by Strangely Marked Metal (Copper Beech Press, 1985). 1994’s Flamingo Watching (Copper Beech), a finalist for the Lenore Marshall Prize and the Lamont Poetry Selection, began to bring Ryan’s work more attention, with some poems finding homes in anthologies. Ryan received a 1995 award from Ingram Merrill Foundation and published Elephant Rocks in 1997 with Grove Press. The year 2000 saw her win the Union League Poetry Prize and publish Say Uncle (Grove Press), winner of a Maurice English Poetry Award. She was awarded an NEA Fellowship in 2001, and, in 2004, both a Guggenheim Fellowship and the Ruth Lilly Poetry Prize, marking a new prominence for her work in the public eye.

Ryan was named a Chancellor of the Academy of American Poets in 2006 and, in 2008, the 16th Poet Laureate of the United States, serving two one-year terms. In the latter role, she advocated for community colleges, launching the program "Poetry for the Mind's Joy” to provide poetry education in community college and a platform for their students’ own poetry. After two further collections, she won the Pulitzer Prize for Poetry for The Best of It: New and Selected Poems (Grove Press, 2010) and was a 2011 National Book Critics Circle Award finalist and MacArthur Foundation Fellow. In 2012, she won the National Humanities Medal. Multiple poems have won the Pushcart Prize and been included in the Best American Poetry series, and her poems and essays have appeared in The New Yorker, Poetry, Paris Review, The Atlantic, and many other publications.

Spare, elliptical, and often philosophical, Ryan’s poetry has been described by J. D. McClatchy as being “like Satie miniatures or Cornell boxes.” Her signature wit and wordplay make for poems that, rather than being light, open the door to serious subject matter. Ryan is frequently compared to figures like Marianne Moore, Emily Dickinson, and Wendy Cope. Her most recent book is Synthesizing Gravity: Selected Prose, out from Grove in 2020. Ryan lives in Marin County, where she moved in 1971, and teaches remedial English part-time at the College of Marin, a role she’s held for over 30 years.

Video: Watch Ryan's final reading as Poet Laureate for the Library of Congress

Photo by Jennifer Loring is licensed under CC BY-SA 4.0.