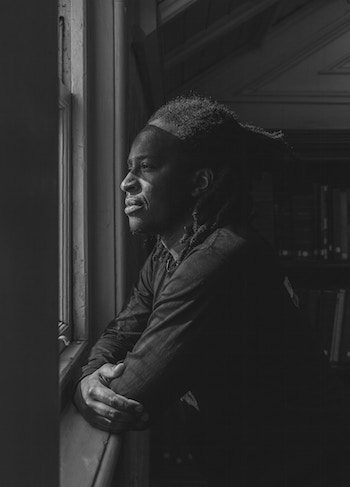 Kayombo Chingonyi was born in Mufulira, Zambia, in 1987 and moved to the United Kingdom in 1993. Although his parents had both died by the time he reached his teens, their love of music had made its mark on him: as a child, Chingonyi was already collecting cassettes and writing and performing his own raps. By age ten, he became interested in poetry as its own sort of music. His literary passion was nurtured by his teachers, including acclaimed poet Dorothea Smartt. In 2003, the teenaged Chingonyi won his first poetry award, the Poetry Society’s Rise Youth Slam Championship, and became a workshop leader for the project. He continued his poetry education with a BA in English Literature at the University of Sheffield and an MA in Creative Writing at Royal Holloway, University of London.

Chingonyi’s debut pamphlet, Some Bright Elegance, was published by Salt in 2012. In that same year, Chingonyi won the Geoffrey Dearmer Prize for an extract from his poem “calling a spade a spade.” Soon afterward, he was awarded his first residency, at Cove Park, where he began work on the poems that would later be gathered into Kumukanda. In the years that followed, Chingonyi held further residencies at First Story, Kingston University, the Nuffield Council on Bioethics, and Royal Holloway/Counterpoints Arts. He also participated in the second round of the Complete Works, a UK program that supports diversity in modern British poetry by mentoring poets of color. During his residency as Associate Poet at the Institute of Contemporary Art, he hosted a panel, “The Poetics of Grime,” which synthesized his musical and literary interests through an investigation into the lyricism of the distinctive UK music genre. He was also tapped as guest editor for issues of Magma Poetry and Poetry Review. Four years after his first pamphlet, Chingonyi published a second, The Colour of James Brown’s Scream.

Chingonyi’s first full-length collection, Kumukanda, was published in 2017, winning both the Dylan Thomas Prize and a Somerset Maugham award and making the shortlist for five other awards. The book intertwines a wide range of subjects explored in Chingonyi’s previous shorter collections, including grief, inheritance, masculinity, and the rift between the poet’s Zambian and British identities. In the titular poem, he explores his feelings around kumukanda, the initiation ritual he would have completed in Zambia as a young man of the Luvale tribe. “Kumukanda” tells an imagistic story of the “small increments” of his British coming-of-age—choosing his mother’s burial outfit, receiving a handshake at her funeral—a series of milestones that pushed him prematurely into manhood but still left him “unfinished” by the standards of his Zambian village. In the poem, Chingonyi also interrogates his own English poetic practice, wondering what his Zambian “alternate self” would think of “these literary pretensions, / this need to speak with a tongue that isn’t mine?” A Blood Condition (2021), Chingonyi’s second collection, was shortlisted for the Costa Poetry Award, the T. S. Eliot Prize, and the Forward Prize for Best Collection, as well as being longlisted for the Jhalak Prize.

Currently, Chingonyi makes his home in West Yorkshire. He is poetry editor of The White Review, where he also organizes a reading series, and an Assistant Professor in the Department of English Studies at Durham University. He leads poetry workshops, which recently included a master class for youth poets that looked at the experience of African soccer players in the UK through the lens of poetry. Outside of his poetic and educational work, Chingonyi remains engaged with music: he hosts a radio show, works as an emcee, producer, lyricist, and DJ, and writes his own music.

Text: A digitally readable copy of Thinking Outside the Penalty Box, an anthology of poems by Chingonyi’s students and other poets inspired by the connections between poetry and football as played by Africans in the UK