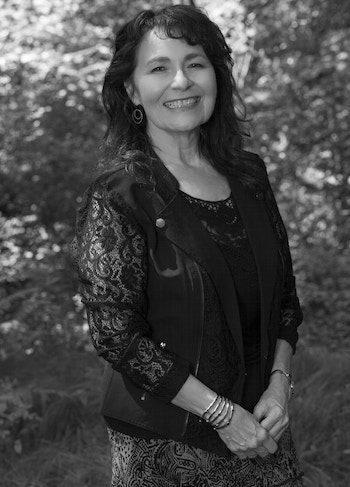 Poet, photographer, scholar, and essayist Kimberly M. Blaeser was born in Billings, Montana, in 1955. A member of the White Earth Band of the Minnesota Chippewa Tribe, Blaeser is of German and Anishinaabe ancestry. She was raised in White Earth Reservation; the largest reservation in Minnesota, it is home to a wide spectrum of natural beauty, including many large lakes and a mix of prairie, lush hills, and conifer forest. Blaeser attended Mahnomen High School and worked as a journalist for two years before pursuing further education. She earned an M.A. in 1982 and a Ph.D. in 1990, both from the University of Notre Dame. Upon finishing graduate school, she began teaching in the English department at University of Wisconsin–Milwaukee. There, she co-founded the multicultural writers’ organization Word Warriors to support the school’s young writers of color.

Trailing You (Greenfield Press), Blaeser’s first book of poetry, was awarded the 1994 Diane Decorah First Book Award by the Native Writers’ Circle of the Americas. Her monograph Gerald Vizenor: Writing in the Oral Tradition (University of Oklahoma Press, 1996), based on her Ph.D. dissertation, was the first Native-authored book-length scholarly study on an Indigenous author. Blaeser also worked to promote Indigenous writers by editing two anthologies, Stories Migrating Home: A Collection of Anishinaabe Prose (Loonfeather Press, 1999) and Traces in Blood, Bone, and Stone: Contemporary Ojibwe Poetry (Loonfeather, 2006). She released the collection Absentee Indians and Other Poems (Michigan State University Press) in 2002, followed by Apprenticed to Justice (Salt Publishing) in 2007.

Blaeser’s many accolades include awards and fellowships from Wisconsin Arts Board; Native Writers’ Circle of the Americas; Wisconsin Humanities Council; Indian Community School Foundation; Woodland Indian Arts Initiative; and Wisconsin Academy of Sciences, Arts, and Letters. She has performed her work at more than 350 venues worldwide, and her writing has appeared in upwards of 80 anthologies and been translated into multiple languages. Her photographs, picto-poems, and ekphrastic poetry have been included in the art exhibitions Ancient Light and Visualizing Sovereignty. She is an editorial board member for both the University of Nebraska Press’ American Indian Lives series and Michigan State University Press’s Native American Series, as well as serving on the boards of directors for the Wisconsin Academy of Sciences, Arts, and Letters; the Wisconsin Poet Laureate Commission; and the Aldo Leopold Foundation.

A passionate nature photographer, Blaeser lives with her family in rural Lyons Township, Wisconsin, and, for portions of each year, in a water-access cabin near Minnesota’s Boundary Waters Canoe Area Wilderness. Blaeser is currently a Professor of English and Indigenous Studies at the University of Wisconsin–Milwaukee and MFA faculty for the Institute of American Indian Arts in Santa Fe.

Audio/Text: Blaser reads and discusses her poem “Poem on Disappearance” for the Library of Congress