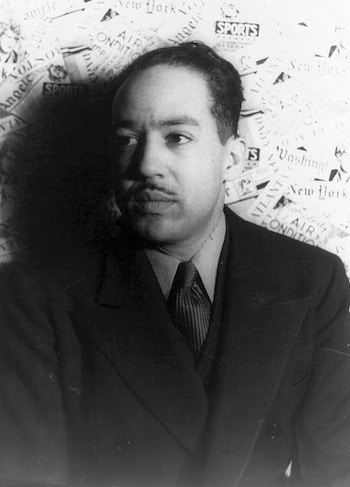 James Mercer Langston Hughes was born in Joplin, Missouri, to a family of mixed Black and white ancestry, including both former enslaved people and slaveholders. His parents divorced when he was an infant. Hughes lived with various family members in multiple cities across the Midwest before attending high school in Cleveland, Ohio, where he wrote for the school newspaper and began writing plays, short stories, and poetry. He attended Columbia University but dropped out due to its racist culture, later receiving a B.A. from Lincoln University. Hughes worked and traveled widely over the next few years, while seeing his writing published in major Harlem Renaissance magazines like The Crisis. His poetry debut, the seminal work The Weary Blues, was published in 1926.

Over his prolific career, Hughes became one of the most prominent figures of the burgeoning Harlem Renaissance, along with Countee Cullen, Claude McKay, collaborator Zora Neale Hurston, and others. Most famous for his poetry, Hughes also wrote plays, novels, short stories, non-fiction, and children’s books, as well as an autobiography. In contrast with many contemporaries, who focused on the stories of upper-class, intellectual Black society, Hughes was influential in writing work that celebrated the rich, varied experiences of working-class Black Americans. He died in 1967, leaving a legacy of trailblazing writing and dedicated activism for the Black literary and theatrical communities.