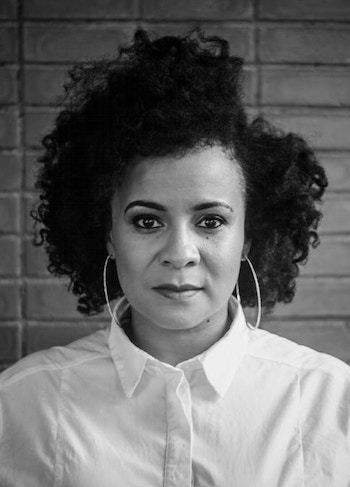 Poet, performer, and activist Lebogang Mashile was born in Pawtucket, Rhode Island, the daughter of exiled South African parents who met in the United States. She and her family moved to South Africa briefly when she was 18 months old, returning to Providence, Rhode Island, for the rest of her childhood and early teen years. There, Mashile grew up as part of Providence’s large community of immigrant children, bussed to majority-white schools where she and her peers of color could never truly fit in. Her family moved back to South Africa permanently in 1994, after Nelson Mandela’s election and the end of apartheid; for Mashile, her experiences in the US were a preparation for both the systemic racism of South Africa and her long-running sense of her outsider status.

Mashile attended Wits University in Johannesburg, where she studied law and international relations. While living there, she discovered Johannesburg’s underground poetry scene and began to perform. To Mashile, art held deep potential for regenerative change in the wake of her country’s years of social struggles, so she changed course and determined to be a poet. She and fellow South African women poets Myesha Jenkins, Ntsiki Mazwai, and Napo Masheane founded Feela Sistah! Spoken Word Collective in 2003. Formed in response to the women’s shared frustration at their exclusion from male-run creative spaces, the group proved to be a space for creative growth for its members, and soon rose to national prominence. In 2004, Mashile was nominated for the Daimler-Chrysler South Africa Poetry Award; that year also saw her debut as a film actress, in Terry George’s Hotel Rwanda, and her performance at the presidential inauguration of Thabo Mbeki.

In 2005, Mashile published her first poetry collection, In a Ribbon of Rhythm (Oshun Books), for which she received the Noma Award for Publishing in Africa. Her second collection, Flying Above the Sky, was self-published in 2008. She also recorded a live performance album, Lebo Mashile Live!, in which her spoken-word poetry is backed by a band. Mashile’s influential career extends far beyond poetry, however: she has co-produced and presented television shows on SABC, SABC 2, and eTV, including the documentary program L’Attitude, game show Drawing the Line, and parenting show Great Expectations. She has also performed in many theatrical productions, such as the cross-genre Threads, producer with choreographer Sylvia Glasser which combined dance, music, and poetry. She wrote a column for the magazine True Love from 2007 to 2010 and released a music EP with performer Majola in 2016.

Mashile has performed in 19 countries worldwide. Her many accolades include being named one of South Africa's Awesome Women of 2005 by Cosmopolitan, one of the Top 100 Youth in South Africa by the Mail & Guardian in both 2006 and 2007, and one of the Top 100 Africans by New African in 2011. She also won the Art Ambassador award at the first annual Mbokodo Awards for South African Women in the Arts. Beloved as a preeminent figure in South Africa’s cultural scene, Mashile also uses her influence to fight for social and political change for women, Black people, and those oppressed by colonialization. She lives with her sons in Johannesburg.