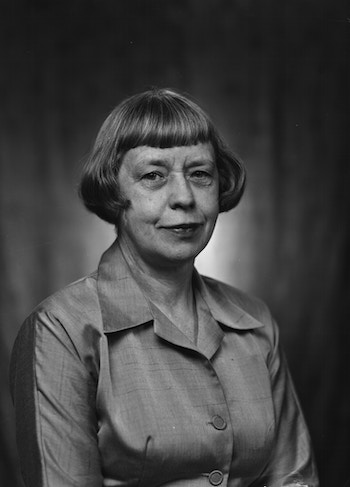 Poet, editor, and educator Léonie Adams was born in Brooklyn, New York, in 1899. She began publishing poetry while attending New York City’s Barnard College, then worked as an editor for the Metropolitan Museum of Art and Wilson Publishing after graduating. In 1925, she published her first collection, Those Not Elect, which would be followed by four more. She married the writer William Troy in 1933.

Adams served as the Poetry Consultant for the Library of Congress from 1948 to 1949. She was also the recipient of the 1954 Bollingen Prize, shared with Louise Bogan; an Academy Fellowship from the Academy of American Poets; a Guggenheim Fellowship; a National Endowment for the Arts Grant; and the Shelley Memorial Award. Over her career, she taught English at institutions including New York University, Sarah Lawrence College, the Breadloaf Writers Conference, and Columbia University. She was awarded an honorary doctoral degree from the New Jersey College for Women in 1950. A mentor to Nobel-winning poet Louise Glück, Adams wrote in a lyric style that drew from both the Metaphysical and Romantic schools. She died in New Milford, Connecticut, in 1988.