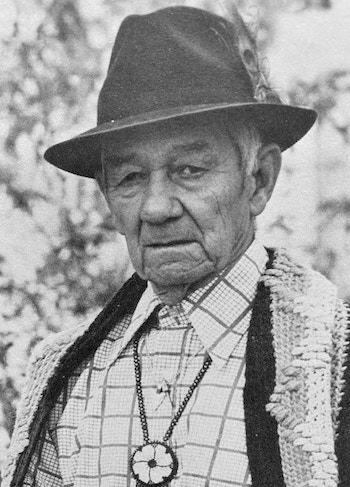 Poet Louis Oliver, who also went by Little Coon and Wotkoce Okisce, was born in 1904 in Coweta, Oklahoma, then part of Indian Territory. An enrolled member of the Mvskoke Creek nation, he was also a Euchee of the Golden Raccoon Clan, whose original home was near Alabama’s Chattahoochee River. Oliver was orphaned in infancy and raised by his aunt, uncle, and maternal grandparents in nearby Okfuskee County. He attended Euchee Boarding School for five years before graduating high school from Bacone College in 1926. Although his family had encouraged him to pursue an education, other members of his community viewed his degree as a repudiation of his heritage, a conflict Oliver would address in his writing.

Oliver wrote some poetry in high school, with influences including seminal Mvskoke Creek poet Alexander Posey, and continued to dabble in it over the next decades. However, only in the 1980s, while living in the Cherokee community in Tahlequah, Oklahoma, did he begin to see himself as a serious writer. The then-septuagenarian Oliver attended a writing group that included prominent younger writers such as Joy Harjo, Barney Bush, and Joseph Bruchac. Their writings informed by Indigenous stories and culture, as well as their use of formal innovations, inspired him to move beyond the traditional Western poetic forms he’d previously written in. Oliver was featured in the group’s anthology, Echoes of Our Being.

Poet and publisher Joseph Bruchac recognized Oliver’s talent and began to advocate for his work, sharing it with other publishers. Oliver’s bilingual chapbook The Horned Snake was published by Cross-Cultural Communications in 1982, with Caught in a Willow Net coming out the following year from Bruchac’s Greenfield Review Press. Subsequent books were Estiyut Omayat: Creek Writings, published in a limited edition from Indian University Press in 1985, and Chasers of the Sun: Creek Indian Thoughts (Greenfield Review Press, 1990). Oliver’s writings also appeared in journals and magazines including Beloit Poetry Journal, Greenfield Review, Tamaqua, Vintage, Northeast Indian Quarterly, and Wooster Review, as well as several anthologies. In 1987, a week before his 83rd birthday, Oliver was honored with the inaugural Alexander Posey Literary Award, granted by the Mvskoke Arts Council.

Oliver’s work draws deeply from Creek cosmogony and traditions, investigating the natural world and tribal theology as well as topics including the historical Creek forced migration and contemporary Creek society. His oeuvre includes striking concrete poems that utilize images from nature, such as the tornado-shaped “Maskoke Okisce” (“A Creek Fable”), part of the Dutch city Leiden’s permanent installation of poems on building walls, and “The Sharp-Breasted Snake.” Oliver died in 1991 in Talequah, Oklahoma.