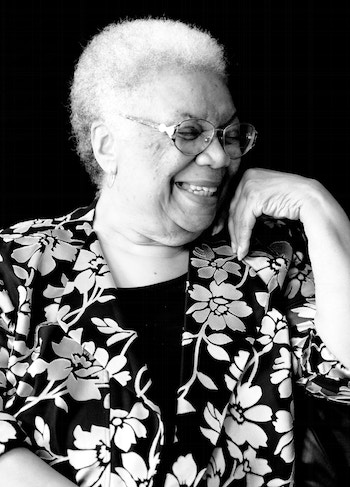 Celebrated poet Lucille Clifton was born Thelma Lucille Sayles in DePew, New York, in 1936. Her father was descended from the people of Dahomey, known now as Benin. Clifton was raised in Buffalo, where she attended Fosdick-Masten Park High School. She studied at Howard University on scholarship before transferring to SUNY Fredonia, not far from her hometown. In 1958, she married Fred James Clifton, a sculptor and a professor of philosophy at the University at Buffalo. The two had six children. Before her career as a poet launched, Clifton worked as a claims clerk for New York State, then as a literature assistant in the Office of Education. Ishmael Reed, a friend of Clifton’s, first shared her work with Langston Hughes in 1966. Impressed, Hughes included her poems in the major anthology The Poetry of the Negro.

Clifton’s first poetry collection, Good Times (1969), was named one of the ten best books of the year by the New York Times. She was the first, and is thus far the only, author to have two books of poetry chosen as finalists for the Pulitzer Prize in the same year: 1987’s Good Woman: Poems and a Memoir, 1969-1980 and Next: New Poems. Clifton’s abundant honors and awards include a further Pulitzer nomination and a Juniper Prize for Two-Headed Woman (1980), and a National Book Award for Blessing the Boats: New and Selected Poems, 1988-2000 (2000). Clifton has also been honored with Emmy Award, a Ruth Lilly Poetry Prize, a Frost Medal, a Shelley Memorial Award, and a Lannan Literary Award. She was awarded grants and fellowships from the NEA and the Academy of American Poets.

A Chancellor of the Academy of American Poets, Clifton held the role of Poet Laureate of Maryland for over a decade and spent many years teaching writing. She served as a poet-in-residence at Coppin State College before teaching at Columbia University, George Washington University, University of California, Santa Cruz, and Dartmouth College, ending her career as a Distinguished Professor of Humanities at St. Mary’s College of Maryland. In addition to 13 books of poetry and a memoir, Generations (1976), Clifton wrote 22 children’s books, many featuring a young Black boy named Everett Anderson. Everett Anderson's Goodbye won the Coretta Scott King Award in 1984.

Clifton’s famously compact, deceptively simple work, written all in lowercase, was characterized by Elizabeth Alexander in the New Yorker as consisting of “physically small poems with enormous and profound inner worlds.” A much-beloved poet who confronted issues of race, gender, body, family, violence, spirituality, and more in her writing, Clifton died of cancer in 2010.

Audio: A 1972 poetry reading by Clifton from the Library of Congress

Text: Read poems by Clifton at Academy of American Poets

the river between us

won't you celebrate with me