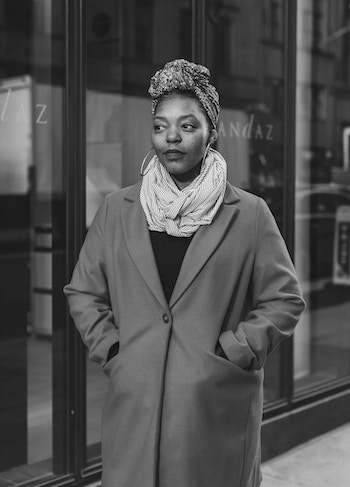 Poet, activist, musician, journalist, and educator Mahogany L. Browne was born in Oakland, California. She dreamed of being a writer while still in fourth grade. After a high school honors English teacher discouraged her from writing poetry, she dropped out of school. However, the determined Browne made her own way, moving to New York City in 1999 and beginning a career as a journalist. In 2001, she returned to poetry with new momentum, performing in her first poetry slam at Nuyorican Poets Café and beginning a long career of mentorship of young writers at Urban Word NYC and elsewhere.

Browne quickly found success in the performance poetry sphere, touring Europe repeatedly and attracting large audiences. She published chapbooks during this time, but placement of a full-length book proved elusive: although she submitted manuscripts to many publishers, her work was largely rejected, due to what was perceived as lack of reach rather than the quality of the poetry itself. However, Browne realized her work’s potential for readership. In 2006, fresh off her fifth successful international tour, she founded her own press, Penmanship Books, and published several of her own titles under its aegis, including #Dear Twitter and Swag. The bulk of Penmanship’s list was dedicated to the work of other emerging poets of color, including writers like Danez Smith and Joshua Bennett who later achieved widespread recognition.

Through her many leadership roles straddling the arts and activism worlds, Browne established a well-earned reputation as a hardworking advocate for poetry and marginalized voices, particularly women and the Black community. She co-founded the performance series Brooklyn Poetry Slam and the activist literary collective #BlackPoetsSpeakOut, which organized online recordings and events protesting the murder of Michael Brown. She also served as Poetry Program director and curator of the Friday Night Slam at New York City’s esteemed Nuyorican Poets Café for 13 years. Browne founded the Women Writers of Color Reading Room at Pratt Institute in 2015 while working toward her MFA in Writing and Activism in the program’s inaugural class. While juggling these roles, Browne continued to write her own poetry, receiving fellowships from Cave Canem, Poets House, Art for Justice, and other organizations.

Browne’s poetry has received increasing attention in recent years. In 2016, she published Redbone, which was nominated for an NAACP Image Award. That same year, she was featured on PBS NewsHour reading her poem “Black Girl Magic.” A rebuttal to society’s limitations on young Black women, the poem explodes the narrative the titular “black girl” is relegated to, in which she “ain't posed to dream at all.” Browne’s jubilant language throws off these constraints, encouraging the poem’s subject to “tell them you are more than a hot comb and a wash and set” in an ending paean in which she “turn[s] into a beautiful black woman right before OUR eyes.” The poem was published as a YA book, Black Girl Magic, in 2018, and also lent its name to the anthology BreakBeat Poets Vol. 2: Black Girl Magic, a seminal collection co-edited by Browne. In the same year, Browne also published the children’s book Woke Baby and launched the Woke Baby Book Fair project for children of color.

Browne currently resides in Brooklyn, NY, where she has made her home for the past 15 years. She serves as Artistic Director of Urban Word NYC, Program Director for Black Lives Matter at Pratt, and Poetry Coordinator at St. Francis College’s MFA Program. She is now co-editing the upcoming middle-grade anthology Woke: A Young Poet’s Guide to Justice.