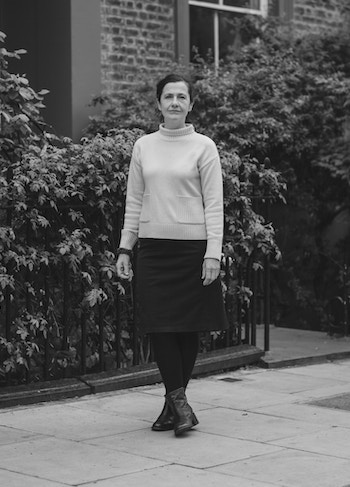 Martina Evans grew up in the village of Burnfort, in County Cork, Ireland, where her family ran a shop with a bar and a single petrol pump. She was the youngest of ten children, all of whom shared the duty of staffing the small shop. Evans fell deeply in love with literature at age three, occasionally to the detriment of her attention to the customers. Her mother, despite a limited education ending in primary school, was a major inspiration for this passion for reading: she touted the superiority of books to television and interspersed Shakespeare quotes into her daily conversation. The young Evans turned to books for both edification and rebellious escapes into fiction, sneaking her current reading into missals during her years at convent boarding school.

Although Evans dreamed of pursuing English literature, her family encouraged her to become a radiographer. She trained in Dublin and moved with her husband to London in the early 80s, slipping in some literary studies at the Open University along the way. She worked at Whittington Hospital for 15 years, writing on and off in spare moments, until the death of her father in 1988 uncorked a sudden outpouring of poetry. She began attending Torriano Meeting House’s poetry readings in Kentish Town, where she found an early poetic community, and devoting her evenings to composing her first novel. The plan was that, once established as a successful novelist, she would leave her job to write poetry: a strategy inspired by the literary itinerary of Patrick Kavanagh, one of her favorite writers, who wrote two short novels and segued neatly into a career as a poet.

Evans’ first poetry collection, The Iniscarra Bar and Cycle Rest, was published in 1995, and her debut novel, Midnight Feast, in 1996. Midnight Feast won a Betty Trask award, and Evans was awarded a two-book contract for further novels. But even as she made a name for herself in the fiction world, she felt impelled toward poetry and hemmed in by the expectation that she keep writing prose. Between the novels, books of poetry insisted on being written—and soon, they were garnering praise of their own. Accolades for her poetry collections include the Ciampi International Poetry Prize; recognition as a Poetry Society Book Choice and a Times Literary Supplement Book of the Year; and Grants for the Arts, Irish Arts Council, and Arts Council England awards. Evans’ most recent book of poetry, Now We Can Talk Openly About Men (2018), was named one of the Books of the Year by the The Observer, TLS, and The Irish Times, and shortlisted for the 2019 Irish Times Poetry Now Award and the Pigott Poetry Award.

Evans’ poetry ranges widely in subject matter. She often delves into her own history and that of Ireland, working with historical fictions and strong voices from her past, like her mother’s, but she also navigates the world of the arts and reimagines cultural artifacts and figures. In her poem “I want to be like Frank O’Hara” from the collection Burnfort, Las Vegas (Anvil Press, 2014), Evans measures her domestic habits—time spent gardening and grocery shopping at Sainsbury’s—against the eponymous poet’s famously avant-garde lifestyle, lamenting, “I’ve never leaned in a club doorway, / my poems in my pocket like Frank.”

In addition to her writing, Evans has taught seminars and workshops at many institutions, including London Metropolitan University, Kingston University, University of East London, Birkbeck University, Goldsmiths, and the City Literary Institute, and numerous international literary festivals. She has held two Royal Literary Fund fellowships at Queen Mary, University of London and has performed her work at venues worldwide. Evans currently serves as a Royal Literary Fund Advisory fellow and a poetry reviewer for the Irish Times. She lives in London with her daughter, Liadáin.

Audio: Martina Evans is interviewed by Julia Copus for the Royal Literary Fund

Text: Evans writes about growing up with books instead of television

Video: A reading by Evans from her prose poem “Petrol”

They Flee from Me