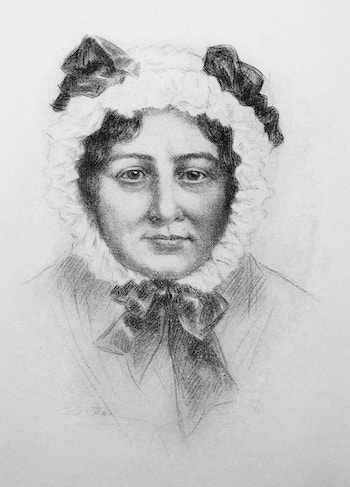 Mary Anne Lamb was born in London, one of three surviving children of John and Elizabeth Lamb. Both parents worked for a barrister and were considered educated for the time period, and Lamb and her brothers John Jr. and Charles were exposed to London’s rich literary life through sightings of Samuel Johnson, Oliver Goldsmith, and others in their daily lives. Lamb worked as a seamstress to contribute to her family, but by the mid-1790s, the strain on her was great: she was responsible for a young apprentice and was the primary caretaker for her father, mother, and younger brother, who were all disabled to varying degrees and dependent on her. She suffered a mental breakdown and stabbed her mother to death. After six months in a mental home, her brother Charles took her out and set up house with her outside of London. The siblings would remain companions for their whole lives, with Lamb entering institutions temporarily whenever she and Charles felt her mental health was declining.

The two Lambs were close with literary figures such as Samuel Taylor Coleridge, William Wordsworth, and Dorothy Wordsworth and drew together a literary circle of their own. Mary Wollstonecraft’s widower, William Godwin, and his second wife invited the pair to contribute to an anthology of stories for children, which inspired them to collaborate on the highly successful Tales from Shakespeare. Another collaboration followed, as well as children’s writing by Lamb alone. The siblings adopted a daughter, Emma Isola, in the 1820s, who lived with them for several years before leaving to work as a governess. Around this time, Lamb’s mental health and Charles’ physical health began to deteriorate, and after Charles’ death in 1834, Lamb lived with nurses for the rest of her life. She died in 1847.