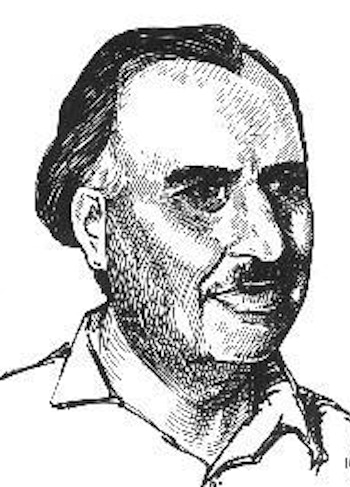 Dinanath Kaul, known as Nādim, was born in Srinagar in Kashmir, India. His father died when he was eight years old, and he was raised in poverty by his mother, who recited poetry to him and his sister. He attended local schools, earning his BA in 1943 and his BE in 1947. Nādim taught at the Hindu High School, and after Indian independence was declared, he was appointed the Assistant Director of Social Education. After periods of writing in English, Hindi, and Urdu, in 1942 he transitioned to writing only in Kashmiri, the tongue of his home state.

Nādim was a deeply influential voice in 20th-century Kashmiri poetry and is widely considered to be the first modern Kashmiri poet. He combined his deep knowledge of folk traditions and a musical use of language with a stance at the vanguard of the progressive movement. Nādim never published a collection, preferring instead to jot poems down on scraps of paper to send to journals or read at literary symposia. He also wrote numerous operas, the first to be published in the Kashmiri language. A recipient of the Nehru Award and the Sahitya Natak Academy Award, Nādim died in 1988.

I Will Not Sing