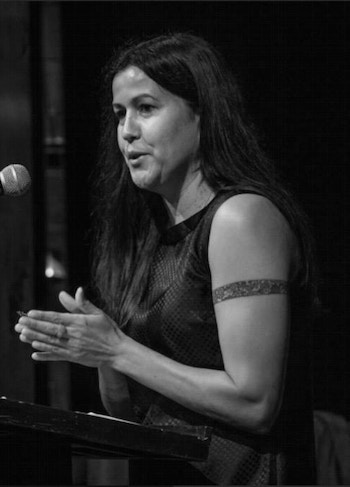 Natalie Diaz was born and raised in Needles, California, in the Fort Mojave Indian Village. She attended Old Dominion University, where she played point guard on the school’s high-ranked women’s basketball team and received a bachelor’s degree in 2000. Diaz played basketball professionally in Turkey, Austria, Sweden, and Spain before returning to ODU to work on a master’s in poetry and fiction, which she earned in 2007. Her first poetry collection, When My Brother Was an Aztec (Copper Canyon Press, 2013), was a 2012 Lannan Literary Selection and appeared on the 2013 PEN/Open Book Award shortlist. 2020’s Postcolonial Love Poem (Graywolf) was a finalist for the National Book Award for Poetry.

Diaz, an enrolled member of the Gila River Indian Tribe, is queer, Latina, and Mojave American and identifies as Akimel O’odham. She has been awarded fellowships from the MacArthur Foundation, Princeton University, the Lannan Literary Foundation, Bread Loaf, and the Native Arts Council Foundation. Her honors also include the Princeton Holmes National Poetry Prize, the Nimrod/Hardman Pablo Neruda Prize for Poetry, and a Ford Fellowship from United States Artists, where she now serves on the Board of Trustees. Diaz has worked with Mojave elders to preserve and revitalize the endangered Mojave language. She currently lives in Mohave Valley, Arizona, and teaches at Arizona State University’s creative writing MFA program.

Cranes, Mafiosos, and a Polaroid Camera

Manhattan is a Lenape Word