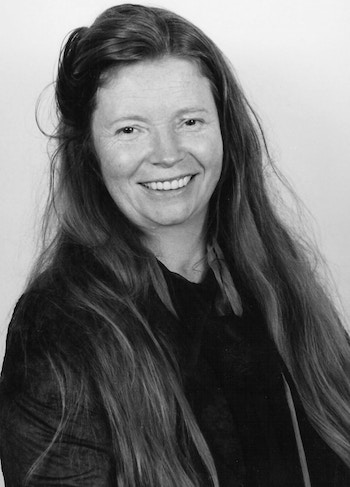 Nuala Ní Dhomhnaill was born in Lancashire, England, to Irish parents, both of whom were doctors for a local Irish mining community. She grew up speaking both Irish and English, reaching a new level of fluency in the former as a five-year-old while living with an aunt in County Kerry. Her family moved to Ireland the following year; she was raised in the Gaeltacht, or Irish-speaking region, of the Dingle Peninsula, as well as in County Tipperary. Ní Dhomhnaill read Irish poets growing up and wrote her first poems in English for her school magazine. At 16, it occurred to her that she could write in Irish as well. She reimagined an in-progress English poem in Irish and sent it to the Irish Times. It won a prize, setting her on a track she would stay on for the length of her poetic career.

Ní Dhomhnaill attended University College Cork, where she studied Irish and English. There, she became the sole female member of the Innti group. Drawing from American Beat poetry, global influences including classical Asian poetry, and youth counterculture, the Innti poets aimed to write Irish-language poetry with a modern sensibility, shaking off the conservative and religious leanings of Irish society to generate a new, liberal Irish poetics. In 1973, Ní Dhomhnaill met and married Turkish geologist Doğan Leflef, with whom she would have four children. They lived abroad in the Netherlands and Turkey for the next seven years.

In 1980, Ní Dhomhnaill and her husband returned to Ireland, where she published her first collection, An Dealg Droighin, the following year. The book won her the first of her four Seán Ó Ríordáin Awards. She published four more Irish-language collections in the next two decades—Féar Suaithinseach (1984), Feis (1991), Spíonáin is Róiseanna (1993) and Cead Aighnis (1998). Mixed with these have been many bilingual collections, most recently Northern Lights (Gallery Press, 2018), in which her Irish poems are translated into English. Her translators have included such major poets as Paul Muldoon, Eiléan Ní Chuilleanáin, and Seamus Heaney. Ní Dhomhnaill is notable for encouraging aesthetic translations that convey the spirit rather than the letter of her poems, enabling her work to read as powerfully in English as in its original language. Her poetry draws from Irish folklore, history, and place, contributing a subversive feminist strain to a space long occupied solely by male poets and storytellers. Her poems are as at home in the Irish “otherworld” as they are in the milieu of women’s dreams, emotions, and desires.

Ní Dhomhnaill is widely considered to be one of the foremost contemporary poets writing in Irish. An Aosdána member, she served as Ireland Professor of Poetry from 2001 to 2004. She is a three-time winner of the Arts Council Prize for Poetry and a recipient of the Lawrence O’Shaughnessy Award for Poetry, the American Ireland Fund Literary Award, and the Butler Award from the Irish American Cultural Institution. Ní Dhomhnaill, who is also an educator and essayist, has held the Heimbold Chair in Irish Studies at Villanova University and Burns Chair of Irish Studies at Boston College as well as serving as the Naughton Fellow of Irish Studies at Notre Dame. In 2018, she became the first woman to be honored with the Zbigniew Herbert International Literary Award. Her works have been translated into French, German, Polish, Italian, Norwegian, Estonian, Turkish, and Japanese. She appears regularly on Irish radio and television and currently lives in Dublin.