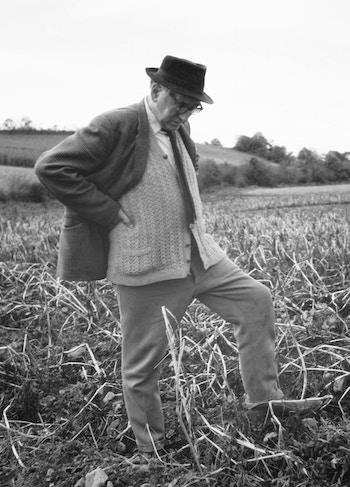 Poet and novelist Patrick Kavanagh was born in rural Inniskeen parish in Ireland’s County Monaghan. The fourth of ten children of a cobbler, he left school at age 13 to apprentice to his father. The young poet had no talent for shoemaking, so instead, he worked on his family’s small farm. Although he lacked formal education, Kavanagh found himself drawn to literature and wrote poems beginning in his teenage years. His writing was first published in local papers in 1928. Following that achievement, he submitted poems to the Irish Statesman; its editor, the Irish Literary Revival figure George Russell (known as Æ), encouraged and eventually published Kavanagh’s work.

Alienated from the denizens of his country townland, who viewed his poetic inclinations with bemused tolerance, Kavanagh was invigorated by finding a kindred spirit in Russell. He walked 50 miles to Dublin to meet with the elder artist, who introduced him to a broad swath of reading material, instilling a late literary education, and to the city’s creative circle. Kavanagh found early success there: he published his first poetry book, Ploughman and Other Poems, with Macmillan in 1936. He lived in London briefly, then settled in Dublin in 1939, hoping to embark on a literary career. However, Dublin was not the artistic enclave he’d yearned for: he found himself tokenized as a peasant-poet, due to the Anglo-Irish literary elites’ sentimental adulation of traditional Irish farming life. Kavanagh wrote one early prose work relying in part on that persona, The Green Fool, which he later rejected. His famed 1942 work, “The Great Hunger,” took a more cold-blooded look at the realities of peasant life in Ireland, rebuking its romanticization by Irish Revival writers and artists. This long narrative poem set him up as an opponent to the dwindling Revival and found him wider audiences across the Atlantic.

Kavanagh worked as a journalist for many years, wearing the hats of gossip writer, film critic, and more for a range of periodicals. He was well-known—and not infrequently disliked—for his sharp, satirical pen, which never swerved from uncomfortable truths about politics, his peers, and major Irish social institutions. During this time, he published the poetry collection A Soul for Sale and the novel Tarry Flynn, the latter of which was briefly banned. In 1952, his brother financed a journal for him to edit, Kavanagh’s Weekly. The magazine folded after 13 issues. Soon after this, Kavanagh pursued and lost a libel case against the magazine The Standard over an anonymous article that depicted him as a fool and a drunk. He also had a lung removed due to cancer.

From this nadir, Kavanagh experienced a rebirth as a poet. While recuperating by Dublin’s Grand Canal, he was inspired to lay aside his acerbic wit for an acceptance of things as they were, making space for a newly optimistic poetics. The new collections Recent Poems and Come Dance with Kitty Stobling emerged, as well as a Collected Poems. He was awarded a lecturing post at University College Dublin and traveled to United States colleges to speak. Kavanagh married his longtime companion, Katherine Barry Moloney, in 1967. He fell ill that year after attending a staging of his Tarry Flynn at the Abbey and died a week later.

A favorite to this day among Irish readers, Kavanagh’s poetry is beloved for its vision of Ireland’s storied country life. However, a deeper vein runs through his work, combining rural nostalgia with a critical, realistic eye that punctures the prior decades’ often superficial glorifications of Irish peasantry. In this effort, per Eavan Boland, Kavanagh “has seemed…not only a signature writer of the Irish twentieth century, but something more as well: a figure creating a revelatory momentum within Irish poetry, and—wider than that—the history of poetry.”

Audio: Kavanagh's poem "The One" read on On Being's Poetry Unbound