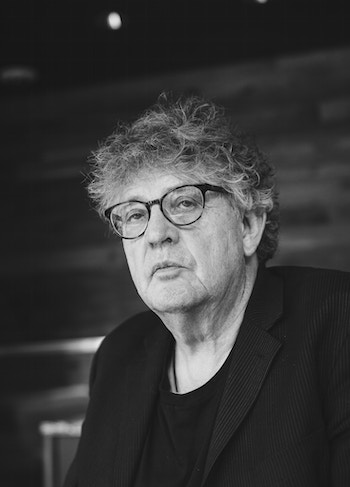 Paul Muldoon was born in Portadown, County Armagh, in Northern Ireland, and grew up on a farm outside The Moy, near the border of County Tyrone. He was the eldest of three children; his father worked as a farmer and market gardener and his mother taught school. His family’s house had no books for the young poet to read aside from the Junior World Encyclopaedia, which he paged through over and over.

In 1969, Muldoon began reading English at Queen's University Belfast, where he met mentor Seamus Heaney. Despite losing interest in his studies, Muldoon stayed in the program, joining in with the Belfast Group of poets, which included Michael Longley, Ciarán Carson, and Medbh McGuckian as well as Heaney. He completed his first short poetry collection, Knowing My Place, at 19, and published his debut full-length, New Weather (Faber and Faber), while still at Queens. New Weather brought him early attention as a distinctive new voice in Irish poetry. Upon graduating, he married fellow student Anne-Marie Conway; the pair would divorce in 1977.

Muldoon worked as an arts producer for the BBC in Belfast from 1973 until the mid-1980s, a time period that covered the worst of Ireland’s Troubles. After leaving the BBC, he taught English and creative writing at the University of East Anglia and at both Caius College and Fitzwilliam College at Cambridge. In 1987, Muldoon married his second wife, novelist Jean Hanff Korelitz, and moved to the United States to teach at Columbia and Princeton. Muldoon would go on to have two children with Korelitz, Dorothy and Asher.

Described by the Times Literary Supplement as "the most significant English-language poet born since the second World War,” Muldoon is the author of more than 30 poetry collections. His many honors include the 2003 Pulitzer Prize for Poetry (Moy Sand and Gravel), the 1994 T. S. Eliot Prize (The Annals of Chile), the Irish Times Poetry Prize, the Griffin International Prize for Excellence in Poetry, the John William Corrington Award for Literary Excellence, the Queen’s Gold Medal for Poetry, and the Seamus Heaney Award for Arts and Letters. He has been awarded fellowships in the Royal Society of Literature, the American Academy of Arts and Letters, and the American Academy of Arts and Sciences. Muldoon's poetry has been translated into 20 languages, and he has received honorary doctorates from ten universities. He served as Oxford Professor of Poetry from 1999 to 2004 and Poetry Editor at The New Yorker from 2007 to 2017, and has also held the role of president of the UK’s Poetry Society.

Muldoon has written librettos for four operas by Daron Hagen, and his lyrics credits include songs for The Handsome Family and Warren Zevon. Additionally, he writes lyrics and plays rhythm guitar for bands of his own, including previous groups Rackett and Wayside Shrines and his current project, Rogue Oliphant. He is the editor of several anthologies, including The Faber Book of Contemporary Irish Poetry, and also translates poetry and writes critical prose and children’s literature. He is currently both the Howard G. B. Clark '21 University Professor in the Humanities and Founding Chair of the Lewis Center for the Arts at Princeton University.

Text: Muldoon is interviewed by Jonathan Kendall for Los Angeles Review of Books