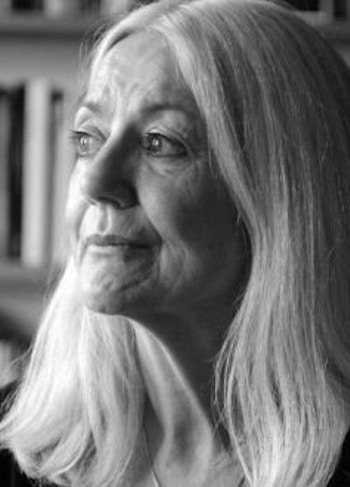 Irish poet and playwright Paula Meehan was born in Dublin, the eldest of six children in a working-class family. Her parents periodically moved to and from London in search of job opportunities, so Meehan spent time both in the UK and in Dublin with her grandparents. Although her home with them was loving, her parents’ living situation was often precarious, an experience that gave her a lifelong sensitivity to the struggles of the economically marginalized. Meehan’s grandfather taught her to read at an early age, and one of her formative poetry encounters was discovering the Emily Dickinson book he kept in a drawer. She attended various schools for her primary education, finishing at the Central Model Girls' School. She was expelled from her Catholic secondary school for organizing a protest and prepared independently for her Intermediate Certificate. Meehan attended Dublin’s Whitehall House Senior College to study for her Leaving Certificate while also participating in a dance drama group and writing lyrics for the local music scene.

Meehan received her BA in English, history, and classical civilization from Trinity College, Dublin. She traveled widely after college, to Germany, Greece, Crete, and the Shetland Islands. In 1981, she embarked upon an MFA at Eastern Washington University, where visiting professors Gary Snyder and Carolyn Kizer became literary influences. She settled down in Dublin in 1983. There, she began holding writing workshops for prisoners and low-income communities in inner-city Dublin. For Meehan, writing and social justice are intertwined; even as her academic and literary star ascended, she continued to prioritize work with disenfranchised groups. As she told The Independent in 2018, "The artist can sometimes be more powerful as an activist by following the muse."

In 1984, Meehan published her first poetry collection, Return and No Blame, with Beaver Row Press. Since then, she has authored eight further solo poetry collections, including Reading the Sky (Beaver Row, 1986); The Man Who Was Marked by Winter (Gallery, 1991; Eastern Washington University Press, 1994); Pillow Talk (Gallery, 1994); Dharmakaya (Carcanet, 2001; Wake Forest, 2002), which won a Denis Devlin Award; Painting Rain (Carcanet, 2009); Geomantic (Dedalus Press, 2016), winner of a Cholmondelay Award for Poetry; and two volumes of selected poetry, Mysteries of the Home (Bloodaxe, 1996) and As If By Magic (Dedalus Press, 2020). She frequently collaborates with creative practitioners across genres; she has written poetry for film and dance, and songwriters have put her poems to music. Her book collaborations include Six Sycamores (2004), which features sculptures and drawings by artist Marie Foley, and Museum (2019), a project with photographer Dragana Jurišić inspired by 14 Henrietta Street, the home of the Dublin Tenement Museum.

Meehan’s many honors and awards include the Marten Toonder Award, the Butler Literary Award, the Laurence O’Shaughnessy Award, and the PPI Award for Radio Drama. She is a member of Aosdána and was named Ireland Professor of Poetry in 2013, becoming the second woman to hold the post. In 2015, she was inducted into the Hennessy Hall of Fame. Meehan’s plays include Mrs Sweeney (1997) and Cell (1999), as well as several plays for children; they have been performed widely on both stage and radio. Her poetry has been translated into languages including French, German, Greek, Estonian, Japanese, and Irish. One of Ireland’s most prominent living poets, Meehan writes poetry known for its wit and attention to craft, its confidence in ranging across topics from natural science to myth to current events, and its centering of forgotten people and places. Meehan lives in Dublin with her partner, poet and writer Theo Dorgan.

Text: Meehan's poem "The Statue of the Virgin at Granard Speaks," shortlisted for the 2015 A Poem for Ireland competition

Text: An article on Meehan at age 60 from the Irish Times

This is not a confessional poem