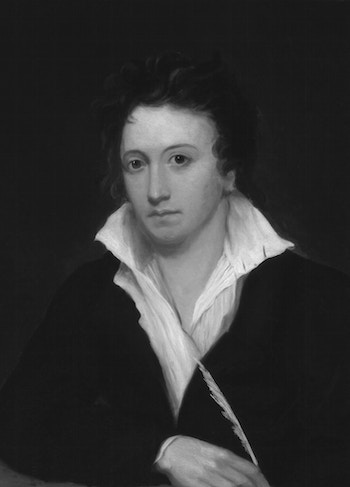 Percy Bysshe Shelley was born near Horsham, West Sussex, England, the eldest of six children of a wealthy landowning family. An eccentric and iconoclast from a young age, Shelley was bullied at Eton, then expelled from Oxford for co-authoring an anarchist pamphlet. However, he managed a fine education in science, languages, and literature and read the contemporary Romantic novels of Robert Southey and Sir Walter Scott. His first book, the Gothic novel Zastrozzi, was written when he was still at Eton.

At 19, Shelley eloped to Scotland with the younger Harriet Westbrook, invoking his father’s wrath for marrying beneath his station. After having two children, the couple separated, and Shelley fell in love with Mary Godwin, the 16-year-old daughter of famed writers and philosophers Mary Wollstonecraft and William Godwin. The two ran off to live together and married shortly after the suicide of Shelley’s first wife. They traveled to Italy and Switzerland, spending time with friends including Lord Byron, John Keats, and Leigh Hunt. During these peripatetic years, Shelley wrote and published prolifically, with output including the famed works Prometheus Unbound and Adonais and his apologia for the arts, A Defence of Poetry. He died at 29 when his boat, the Don Juan, sank in the Gulf of La Spezia. Shelley is remembered for his foundational contributions to Romantic literature and to English poetry as a whole, as well as for epitomizing the imagined Romantic lifestyle through his passionate loves and dedicated pursuit of personal freedom.