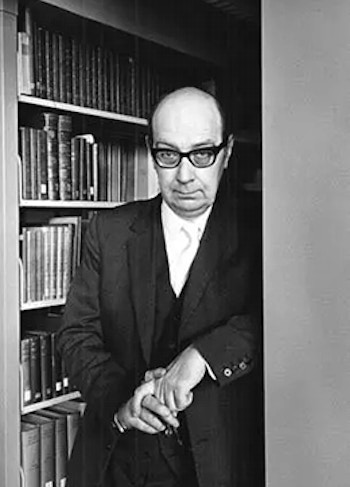 Philip Larkin was born and raised in Coventry, England. The younger child of a well-to-do family, Larkin wrote constantly beginning in his mid-teens, with influences including Auden, Eliot, and Yeats. He earned his BA from St. John’s College, Oxford, where he made first-class honors and became close with Kingsley Amis. The two later emerged as core figures of The Movement, England’s postwar literary school. Amis also based the title character of his novel Lucky Jim loosely on Larkin. After graduating, Larkin studied to become a librarian. His first library role, in Shropshire, led the never-married poet to meet the first of a series of girlfriends and affair partners—including fiction writer Maeve Brennan—who would deeply influence his writing. Larkin went on to work at libraries in Leicester and Belfast, then settled in as the longtime librarian for the University of Hull.

Larkin published one poetry collection, The North Ship (1945), and two novels, Jill (1946) and A Girl in Winter (1947), before achieving widespread recognition for his poetry with The Less Deceived in 1955. His subsequent collections, The Whitsun Weddings (1964) and High Windows (1974), were also enthusiastically received by the public. His poetry was described by Jean Hartley as a “piquant mixture of lyricism and discontent” portraying “ordinary people doing ordinary things.” Larkin was and remains a highly popular poet despite his sparse publications and reclusive nature; he turned down both an OBE and the position of Poet Laureate, though he accepted honors including the Queen’s Gold Medal for Poetry and being made a Companion of Honor. He died in 1985.

Photo by Fay Godwin. Fair use, via Wikipedia.

This Be the Verse