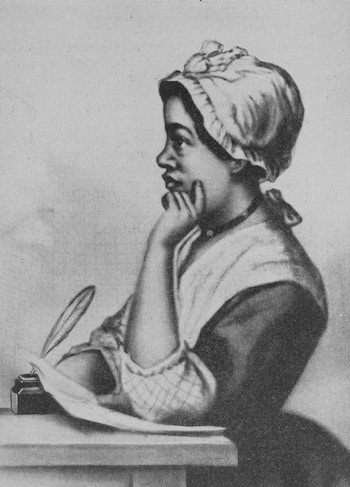 Phillis Wheatley was the first Black American and the second American woman to publish a collection of poetry. Born in West Africa and brought to America as an enslaved woman in 1761, she was purchased by the Wheatley family of Boston, who quickly discovered her intelligence and educated her in reading, writing, classic languages, religion, and more. By age 13, she was translating Ovid and writing her own poetry: largely elegies and work with Christian and classical themes. Because of racial bias, the Wheatley family could not find enough subscribers to get a collection of her poems printed in America. However, the British proved more supportive, and Wheatley’s book Poems on Various Subjects, Religious and Moral was published there in 1773 to great acclaim from the general public, as well as recognition from both prominent British figures and Americans like George Washington and Benjamin Franklin.

Wheatley was emancipated in 1774 and married John Peters, an entrepreneur, in 1778. Despite Wheatley’s renown as a poet, the financial difficulties of life for freed Blacks meant that the couple struggled to stay afloat; the two or three children they likely had died as infants, and Wheatley died in 1784 while her husband was in prison for debt.

On Being Brought from Africa to America