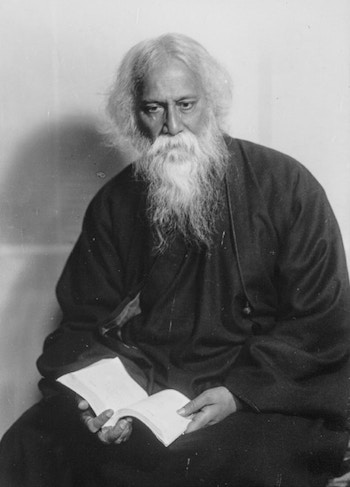 The great polymath Rabindranath Tagore was born the youngest of 13 siblings in Calcutta (now Kolkata), India. Many of his family members were artists, writers, musicians, and scholars who helped shape the burgeoning Bengali Renaissance of culture in their home state of Bengal. Tagore began writing poetry at age eight and was educated primarily at home, with brief stints at schools in Calcutta and Brighton, England. He published poetry starting at 16 and soon was writing in multiple genres, including short stories, which were the first in the history of Bengali literature. He married Mrinalini Devi in 1883, a much younger woman with whom he had five children.

Over his long, accomplished career, Tagore wrote poetry in various forms, fiction, plays, essays, criticism, travel writing, philosophy, and memoir. He was also active as a social reformer, educator, scientist, and practitioner of arts from music to painting to choreography. Politically, Tagore was an anti-nationalist and anti-imperialist who critiqued both the violence of Britain’s control of India and of oppressive Indian social structures like the caste system. In 1913, he became the first non-European and person of color to win the Nobel Prize in Literature. He was knighted by the British Raj in 1915 and repudiated his knighthood in 1919 in response to the Jallianwala Bagh Massacre. Tagore visited more than 30 countries in his lifetime and befriended figures as diverse as W. B. Yeats and Albert Einstein. He died in 1941; his immense impact on modern Indian culture is matched only by that of Mohandas Gandhi.