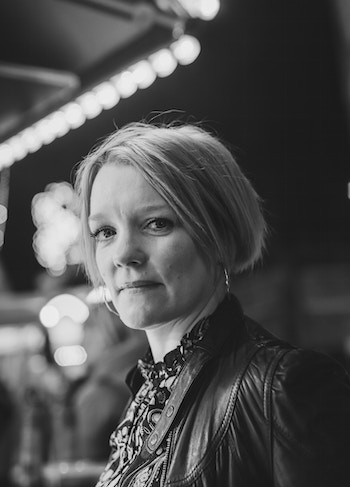 Poet, writer, and educator Rachel Bower was born in Bradford, West Yorkshire. In her earliest youth, she showed signs of a future as a writer: as she puts it, “As a child, I used to just sit and write and write and write with a biro until my hand hurt.” She earned her MA in English literature and her Nation, Writing, Culture MSc at the University of Edinburgh, followed by a PhD in English at the University of Cambridge.

Bower’s debut chapbook, Moon Milk, was published by Valley Press in 2018. These Mothers of Gods, her first full collection, appeared in July 2021 from publisher Fly on the Wall Press. Both works examine contemporary motherhood, domesticity, and the female lived experience, with an eye toward the impact of societal power structures in shaping these roles. Along with poets like Liz Berry and Rachel Zucker, Bower is at the forefront of poetry’s current movement toward treating these often-stigmatized topics with the seriousness they deserve.

Bower’s poems have appeared widely in publications including The London Magazine, Magma, New Welsh Review, Frontier, And Other Poems, and Stand. Her poetry has won the York Literature Festival Poetry Prize, the Mother’s Milk Books Writing Prize, and other competitions, and it has been shortlisted for Newcastle University’s Flambard Poetry Prize and The London Magazine Poetry Prize. She has had work commissioned by BBC Radio/National Poetry Day, the British Library, Poet in the City, and Apples & Snakes North. Bower’s fiction has also garnered awards, including The London Magazine Short Story Prize and the W&A Short Story Competition, and has been shortlisted for The White Review Short Story Prize and longlisted in further competitions. Her nonfiction book, Epistolarity and World Literature, 1980–2010, was published by Palgrave Macmillan in 2017.

Bower has taught at the University of Cambridge and the University of Leeds. From 2016 through 2020, while a Leverhulme Research Fellow at the University of Leeds, she investigated the links between poets in Leeds and Nigeria in the 1950s and 60s. As a qualified Community Development Worker, Bower organizes and teaches creative workshops with an array of organizations. She has worked with Poet in the City; Sheffield Libraries; Barnsley Museums; the British Library; the Universities of Sheffield, Leeds, and Dundee; and many schools, children’s centers, and youth services programs.

Bower served as Guest Editor of The A3 Review in 2020. With Helen Mort, she edited the 2018 Verse Matters anthology, bringing together work from Verse Matters, the Sheffield-based feminist arts collective that she founded in 2015. She also founded Wild Writes, an organization that hosts workshops to inspire creativity in connection with nature. Bower is currently editing a poetry anthology with Simon Armitage, to be published by Faber & Faber, and teaching as an Associate Lecturer in Creative Writing at the University of Leeds.

Video: Bower speaks in the Digesting History project by Poet in the City, the British Library, and Sheffield Libraries