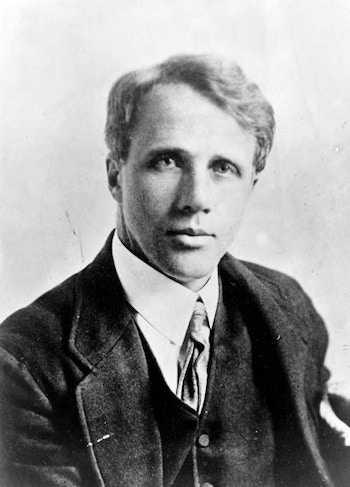 Robert Lee Frost was born in San Francisco, California, and moved with his mother and sister to Lawrence, Massachusetts, at his father’s death in 1885. He became interested in writing poetry in high school, selling his first poem to the New York Independent in 1894. He briefly attended Dartmouth University, then Harvard University, graduating from neither. After Frost married Elinor Miriam White, his grandfather bought the young couple a farm in Derry, New Hampshire, where he farmed before turning to teaching to make a living. Facing a lack of attention to his poetry in the United States, Frost took his family to England in 1912, where his first two books of poetry, A Boy’s Will and North of Boston were published, bringing him to international attention in his 40th year. His reputation now established, he returned to the United States and lived in New England for much of the rest of his life, teaching at colleges including the University of Michigan, Amherst College, and the Bread Loaf School at Middlebury College.

Frost’s masterful poetry—known for its use of traditional forms, celebration of rustic New England life, and skillful mingling of the everyday and existential—has been recognized like that of few other American poets. He was awarded four Pulitzer Prizes in Poetry, making him the only poet to do so, was nominated for the Nobel Prize in Literature 31 times, and garnered the Congressional Gold Medal. He died in 1963 and was survived by two of his six children.

Nothing Gold Can Stay

Stopping by Woods on a Snowy Evening