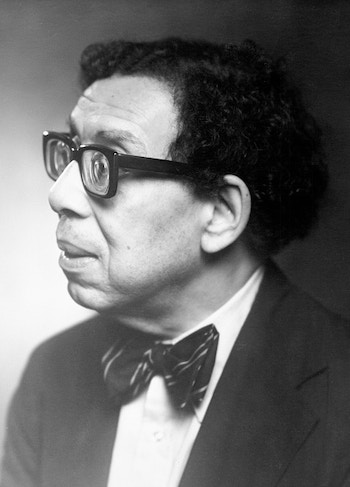 American poet and educator Robert Earl Hayden, born Asa Bundy Sheffey, was raised in Detroit, Michigan, in the poor neighborhood of Paradise Valley. His parents separated before he was born, and he was fostered by a childless neighboring couple, Ellen Westerfield and William Hayden. His foster parents were loving, but their tense marriage and his birth mother’s frequent conflicts with them made for a difficult childhood. Prone to depression, nearsighted, and small for his years, Hayden avoided the sports and social activities most boys his age partook in. He spent much of his youth indoors, reading books and writing poetry. By age 18, he had had a poem published in Abbott’s Monthly.

Upon graduating high school, Hayden received a scholarship to attend Detroit City College, now called Wayne State University, where he majored in Spanish and minored in English. In 1936, he left school one credit short of graduating to work for the Works Progress Administration’s Federal Writers’ Project. This gave him his first opportunity for intensive research into Black history, which would become a preoccupation of his later poetry. Two years after leaving the project, he married musician Erma Morris, with whom he would have one daughter, Maia. He also began following his wife’s Bahá’í faith. The core Bahá’í teachings of social justice and the unity of humanity would also infuse his writing going forward.

In 1940, Hayden published his first of what would be nine poetry collections, Heart-Shape in the Dust. The following year, he enrolled in the University of Michigan for his graduate degree in English Literature. He studied under W. H. Auden, whose precise, tautly structured writing style was a major influence, and he won a Hopwood Award for a series of poems about Black enslavement and the Civil War. Following his graduation, he became a teaching fellow at Michigan, making him the first Black faculty member in its English department.

Hayden continued to publish poetry collections; his third, A Ballad of Remembrance (1962), won the grand prize at Dakar’s First World Festival of Negro Arts by unanimous vote. His subsequent volume, 1966’s Selected Poems, brought him national and international critical acclaim. After this point, Hayden’s reputation grew with each new collection. In 1975, he was elected to the Academy of American Poets. The following year, he became the first Black person to be appointed Consultant in Poetry to the Library of Congress, the equivalent of today’s Poet Laureate. He served two terms in this role, earning honorary degrees at Brown University and Fisk University during the years of his consultancy.

Hayden taught English during the whole of his poetic career, though he considered this work secondary to his poetry, calling himself “a poet who teaches in order to earn a living so that he can write a poem or two now and then.” He worked at Nashville’s Fisk University for more than twenty years, during which time he served as poet-in-residence at Indiana University and visiting poet at the University of Washington, the University of Connecticut, Dennison University, and Connecticut College. He spent the last eleven years of his teaching career at the University of Michigan.

Although he was one of his era’s leading poets, Hayden faced criticism in the 1960s for his insistence on regarding himself as an American, rather than a Black, poet. The emergence of the racially focused Black Arts Movement led to attacks on his belief in poetry’s abstraction from politics and polemics. However, Hayden’s depictions of Black society, culture, and history are among his most acclaimed work, and his poems on people and topics including Nat Turner, Malcolm X, Harriet Tubman, the Underground Railroad, and ghettoized Black communities were major contributions to the depiction of Black American life in literature. He is considered today to be among the major Black American poets.

Text: Read poems by Hayden at the Poetry Foundation