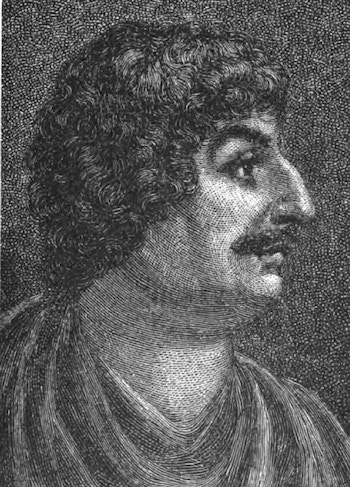 Poet and cleric Robert Herrick was born in London in 1591, the seventh child of a goldsmith and his wife. His father died when he was an infant. Herrick was apprenticed to an uncle to learn the goldsmith’s trade, but he abandoned his apprenticeship after only six years, opting instead to attend the University of Cambridge. After graduating, he likely spent time in London, meeting and falling into the orbit of the major poet Ben Jonson. Herrick and a circle of other writers dubbed themselves the “Sons of Ben,” recognizing their interest in following Jonson’s teachings and poetic principles.

Herrick took holy orders in 1623 and became vicar of Dean Prior in rural Devonshire in 1629. In 1647, during the English Civil War, the Royalist poet was expelled from his position for refusing to sanction the victorious Puritans’ reforms to the Anglican church. However, during the Restoration, Herrick was reassigned to the vicarship, a position he would hold from 1660 until his death in 1674.

Herrick’s only published collection, Hesperides; or, the Works Both Human and Divine of Robert Herrick, Esq., was published in 1648. The volume’s 1200 short poems range widely across subjects—some of which are enumerated in his poem “The Argument of His Book”—and include love poems, pastorals, religious and political works, and poems on poetry itself, often informed by his wide reading of classical authors. Relegated to the status of minor poet for centuries, Herrick is now considered by critics to be one of the great poets of his historic moment.

The Argument of His Book