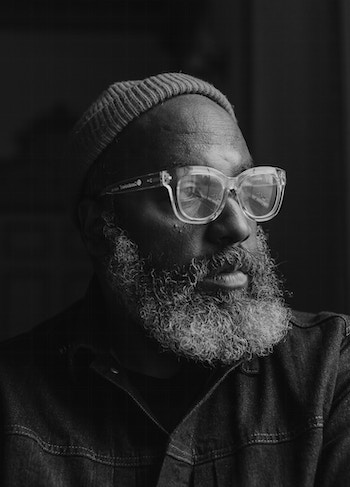 Writer and educator Roger Robinson was born in Hackney, East London, the son of Trinidadian immigrant parents. He returned to Trinidad with his family as a four-year-old, where his mother worked as a nurse and his father as an oil company executive. Both of Robinson’s parents made their home a space for creativity and learning: the young poet found inspiration in his mother’s great talent for storytelling, while his father introduced him to the classics in comic book form. Robinson attended a top school where many teachers were also artists and recognized his own gift for writing early on. At age 19, he moved back to England, living with his grandmother in Ilford, East London, before settling down in Brixton.

By the 1990s, Robinson was teaching poetry in city schools, often working with Black youths, and writing his own work. He became part of London’s poetry community, where he found an early mentor in Bernardine Evaristo, who brought him into a support program offering free writing workshops. There, he met Kwame Dawes, another early champion of his poetry who broadened his reading by introducing him to global poetics traditions. Robinson published a pamphlet of short fiction, Adventures in 3D, in 2001. His first poetry pamphlet, Suitcase (Flipped Eye Publishing, 2004), was shortlisted for the Oxford Brookes Poetry Prize, and his second, Suckle (Waterways Series, 2009), won the People’s Book Prize. The Butterfly Hotel (Peepal Tree Press, 2013), his debut poetry full-length, was shortlisted for the OCM Bocas Poetry Prize; also in 2013, he was highly commended by the Forward Poetry Prize.

Robinson’s acclaimed collection A Portable Paradise (Peepal Tree Press, 2019) won him the 2019 T. S. Eliot Prize—making him only the second Caribbean poet honored with the award—and the Royal Society of Literature’s Ondaatje Prize 2020 for a distinguished work evoking the spirit of a place. It was also shortlisted for the Derek Walcott Prize and chosen as New Statesman Book of the Year. Split into five sections, each ending in a poem on paradise, the book covers topics from the Grenfell Tower fire to Jamaican immigration on the Empire Windrush to the premature birth of Robinson’s son in a diverse, interlocking set of styles and tones.

Robinson is a Fellow of the Royal Society of Literature and an alumnus of The Complete Works. He was chosen by Decibel as one of 50 writers to influence the Black British writing canon, and he counts writers such as Inua Ellams and Johny Pitts among his mentees. Robinson teaches and performs internationally and has received commissions from The National Trust, London Open House, BBC, The National Portrait Gallery, V&A, INIVA, MK Gallery, and Theatre Royal Stratford East. His workshops have been shortlisted for the Gulbenkian Prize for Museums and Galleries and were a part of the Barbican’s Webby Award–winning site Can I Have a Word.

Robinson is a co-founder of Spoke-Lab and, with Malika Booker and Jacob-Sam La Rose, the writing collective Malika’s Kitchen. He also collaborates on the Rest Residency. Robinson is a musician as well as a poet; he serves as lead vocalist and lyricist for crossover project King Midas Sound and has performed poetry with bands such as Techno Animal, Flytronix, Attica Blues, The Bugz, Speeka, and The Black Space Quartet, as well as recording solo albums with Jahtari Records. He has also performed one-man shows The Shadow Boxer, Letter from My Father’s Brother, and Prohibition, which premiered at the Battersea Arts Centre’s British Festival of Visual Theatre. Robinson lives with his wife and son in Northampton.

The City Kids See the Sea