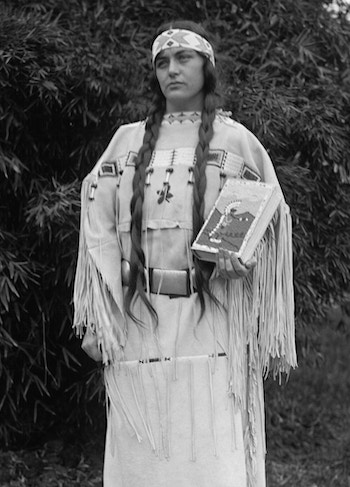 Writer, educator, and Native American rights activist Ruth Muskrat Bronson was born and raised in the town of White Water on the Delaware Nation Reservation, then part of Indian Territory. Her father was Cherokee, with ancestors who had journeyed on the Trail of Tears, and her mother was of Irish and English descent. Bronson pursued an education at various colleges, but she struggled to complete a degree due to her financial situation. She began to lecture and organize, and in 1922, she was chosen by the YWCA as an international student delegate to East Asia and Hawaii. She used the global attention this brought her to continue her activist efforts, presenting an appeal for improved education for Native American communities to an audience including President Calvin Coolidge.

Bronson attended Mount Holyoke on a full scholarship, writing poetry and becoming the college’s first Native American graduate. She subsequently taught in Native schools, where she strove against assimilationist education, and married John F. Bronson, with whom she adopted a Native daughter. Over her long career as an activist, she wrote and lectured prolifically and took on major roles for national organizations including the Bureau of Indian Affairs and the National Congress of American Indians. Bronson fought for a range of issues impacting Native Americans, from land and water rights to education, medicine, and community development. She eventually left the national stage for impactful work with local groups in Arizona. Bronson won many honors for her ceaseless advocacy, including the Indian Achievement Medal of the Indian Council Fire and the Oveta Culp Hobby Service Award. She died in 1982 in Tucson, Arizona.

Sonnets from the Cherokee (I)