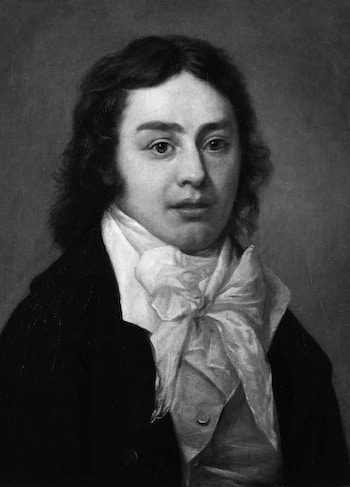 English Romantic luminary Samuel Taylor Coleridge was born in Devonshire, the youngest of thirteen siblings and half-siblings of schoolmaster and vicar John Coleridge. A precocious reader, he took in works including Robinson Crusoe and The Arabian Nights' Entertainment by the age of six and wrote his own poetry beginning in childhood. Coleridge attended Jesus College at Cambridge, where he met the poet Robert Southey. With Southey, he developed radical political ideas and planned a Utopian community, Pantisocracy, which the two later abandoned. Coleridge and Southey married a pair of sisters, the Frickers; however, Coleridge’s marriage proved unhappy, and he separated from his wife after their fourth child was born.

Coleridge’s poetic career found its zenith in the late 1790s, during which time he published a first book of poetry, Poems on various subjects, and met soon-to-be fellow Lake Poets William and Dorothy Wordsworth. He was a neighbor and collaborator of the Wordsworths for two years, writing The Rime of the Ancient Mariner, Kubla Khan, and many other renowned poems. His 1798 joint publication with William Wordsworth, Lyrical Ballads, originated English Romanticism. At 30, Coleridge put poetry aside: he became interested in German critical philosophy, including the works of Kant, which he was the first to bring to England; embarked on literary criticism, including a famed series of lectures on Shakespeare and the major work Biographica Literaria; and wrote theological essays that are still influential today. For the last decades of his life, he traveled widely but still struggled with an opium addiction, and he spent his final years living under the full-time care of a doctor in London. Coleridge died in 1834, leaving a monumental legacy in both poetry and philosophy that continues to this day.

The Rime of the Ancient Mariner