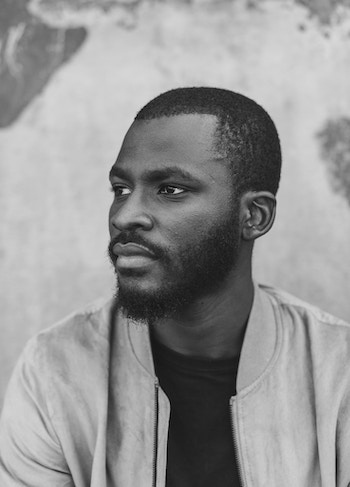 Samuel Yakura is a Nigerian-born writer and performance poet residing in Ireland. The eldest of four siblings in his family, Yakura was a creative, inquisitive child who enthusiastically explored stage, sound, and language. Freestyle sessions in his mother’s kitchen, primary school debates, and a stint as musician and songwriter in a college band were all formative experiences that charted his path toward the literary arts, and eventually to his successes as a spoken word poet and performer.

In 2015, Yakura began actively participating in Nigeria’s literary scene and developing his budding poetic craft. He became a member of the Abuja Literary Society, the local literary space and community for creatives in Abuja, Nigeria, where he attended open mics, readings, workshops, and master classes. His efforts soon paid off in the multiple competitions he won against poets from across the country, including the Abuja Literary Society Slam and Grand Slam and the Oxfam Slam. Yakura also opened for and performed at famed performance poet Dike Chukwumerije’s Night of the Spoken Word, one of the foremost spoken word shows in Nigeria, among other events.

Yakura moved to Ireland in 2018 to pursue a master’s degree in construction project management. He quickly became involved with the Irish literary world, co-curating the Speakers Corner event for Central Arts Waterford’s Summer in the City event and winning the first Talkatives Slam Competition in Dublin, put together by Boundless & Bare, Slight Motif, and WeAreGriot. In the fall of 2019, Yakura was one of six poets shortlisted for Poetry Ireland’s Versify 2019, an initiative offering spoken word poets mentorship and practical guidance for their work through intensive workshops and a showcase with renowned poets at the Dublin Fringe Festival.

Presently, Yakura is the newest member of WeAreGriot, a collective of Nigerian-Irish poets and storytellers consisting of himself, Dagogo Hart, and Felicia Olusanya (FeliSpeaks). The group’s focus is on curating poetry and rap events, including the Talkatives Slam series, and they also write plays for stage productions, with their newest work, Deities, set to premiere in 2021 as part of Where We Live’s Off Plan 3. Their writing also appears in Dublin Fringe Festival’s Utopia or Bust: Manifestos for a New Era.

Yakura is a construction worker by day and a committed proponent of spoken word arts in his remaining hours. He believes in performance poetry as a critical way of engaging with social narratives and the human condition in a form that transcends the printed page.

10 Things I Want To Say to a Black Woman