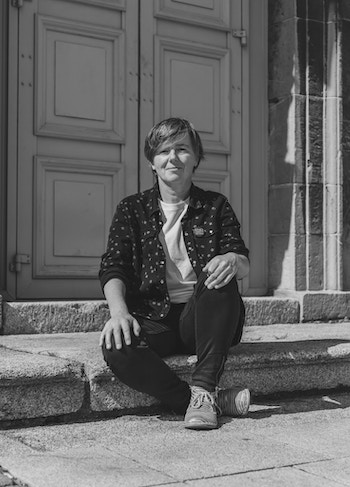 Sarah Clancy is a poet and community worker from Galway, Ireland. She holds an MA in public advocacy and activism, as well as diplomas in European human rights law and community development practice. Clancy began writing poetry in 2009. Since then, she has published three collections of poetry: Stacey and the Mechanical Bull (Lapwing Press, 2011), Thanks for Nothing, Hippies (Salmon Poetry, 2012), and The Truth and Other Stories (Salmon Poetry, 2014). With fellow Galway poet Elaine Feeney, she released Cinderella Backwards, a poetry CD, in 2013.

Clancy has placed or been shortlisted in several of Ireland’s preeminent written poetry competitions, including the Ballymaloe International Poetry Prize, the Patrick Kavanagh Award, and the Listowel Collection of Poetry Competition. In 2015, she was named the Bogman's Cannon People's Poet, and in 2016, she was the Lingo Festival's Poet Laureate. She won the Irish People’s Poetry Prize for her poem “And Yet We Must Live in These Times” and has received an individual artist's bursary from Galway City Council. Known for her poetry’s warmth and wit, Clancy incorporates social justice as a major subject in her work, but also writes on themes of love, nature, and more.

As a performance poet, Clancy has won the Cúirt International Festival of Literature Grand Slam Championships and has been runner-up in both the North Beach Nights Grand Slam and the All-Ireland Grand Slam Championship. Her poems have been published in translation in Mexico, Slovenia, Poland, Italy, Spain, and Nicaragua, and in English in Ireland, the UK, the USA, and Canada. Her work has also been broadcast on RTÉ and BBC Radio.

In her career as an activist, Clancy has been involved in many campaigns in Ireland. She has advocated for environmental justice, bodily autonomy, marriage equality, and, most recently, the ongoing campaign to end Direct Provision. Clancy has poetry forthcoming in an anthology of queer poetry, Queering the Green (Lifeboat Press, Belfast), and a new collection from Salmon Poetry. She lives and works in County Clare.