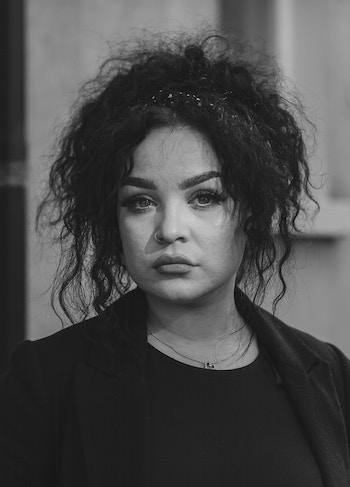 Irish spoken word poet and performer Sasha Terfous was born and raised in the small rural town of New Ross in South-East Ireland. As a child, she was indoctrinated into a love of literature by her grandfather, who got Terfous her first library card and took her to the library each week. She began writing as a teenager, delving into forms including short stories, novellas, and screenplays before homing in on spoken word poetry as her preferred genre. Terfous counts Maya Angelou and Sylvia Plath among her early poetic influences.

At 19, Terfous moved to the neighboring city of Waterford and began attending open mics. Her professional career as a poet began in 2016 with Word Up Collective, a newly formed group bringing together Irish artists working in rap, hip-hop, and spoken word. Since then, she has performed for Red Bull, RTÉ Ireland, Dance 2 Connect, and other venues and events. In 2019, she participated in the Female Tribes project, the largest global study on contemporary women to date, becoming a voice for its arrival in Ireland. The poem she wrote for the occasion, “Warrior Women,” is a vehement, urgent response to the study’s findings that it has never been better to be a woman in Ireland. Following its release, Terfous was invited to perform at the Electric Picnic, Other Voices, and All Together Now, and to appear with Wooden Elephant on their German performances of Beyoncé’s Lemonade album, Dublin Fringe Festival’s Play Like A Riot Grrrl, and alongside the RTÉ Concert Orchestra.

Despite facing both racism and homophobia as a queer person of color, Terfous describes herself as having turned those negative experiences into growth and opportunity. For her, poetry serves as a method of activism: through it, she draws attention to voices that should be heard and social and political issues that need to be addressed. In her poem “Identity.,” she explores the everyday Black experiences that a mixed-race girl with a white single parent is denied and the far-reaching impact of growing up with an absent father and distant traditions. Through a litany of examples of deprivations both large and small—all the way down to “jollof rice and spiced fish at your best friend's house because momma don’t know how to cook it”—and mistaken assumptions about Black people, Terfous expresses the turmoil of finding oneself in a family, community, and world that seem to deny one’s identity outright.

2020 has found Terfous writing passionately on the Black Lives Matter movement, undertaking commissions for the likes of NUI Galway, and performing for the online edition of Bloomsday alongside Aidan Gillen, David Norris, and Glen Hansard. Terfous lives in Waterford and is at work on many future projects.

Video: The film of Terfous’ “Warrior Woman” for Female Tribes