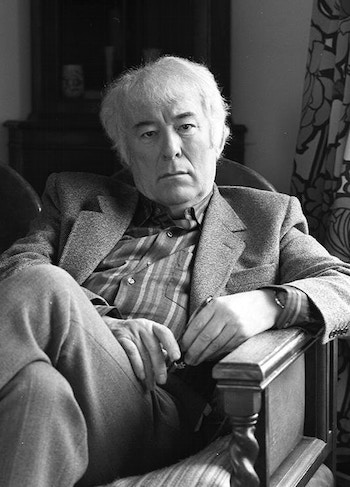 Born in County Derry in Northern Ireland, Seamus Heaney was the eldest of nine children. After attending a Catholic boarding school, he studied English at Queen’s University Belfast, where he discovered the work of Ted Hughes: an inciting event in his poetic life. Heaney then met the writer Michael McLaverty, with whose encouragement he began to publish poetry in the early 1960s. He was recruited into the Belfast Group of poets, alongside Derek Mahon and Michael Longley. The next few years were eventful ones for the young Heaney: between 1965 and 1968, he married writer and teacher Marie Devlin; had his two sons, Michael and Christopher; and published his first poetry collection, Eleven Poems, followed by a second, Death of a Naturalist, which brought him to the public eye and won him the Geoffrey Faber Prize, among others. Over the course of his long career, Heaney would go on to win many of the major English-language poetry awards, including the Forward Prize, the E. M. Forster Award, the T. S. Eliot Prize, and two Whitbread Prizes.

Over the next decade, Heaney wrote intensively, taught at several colleges, and launched reading tours both at home and overseas. His daughter, Catherine, was born in 1973. Three years later, he moved with his family to Sandymount, Dublin, which would be his primary residence until his death. Heaney began teaching at Harvard University in 1981, where he spent four months a year for the next 25 years, first as a visiting professor and later as the school’s Poet in Residence. His fascination with the English language and its roots took new form in his first translation, 1984’s Sweeney Astray, based on the Irish lyric poem Buile Suibhne. Heaney followed this with a version of Sophocles and further medieval translations, his most famous being his prizewinning 1999 rendition of the epic Anglo-Saxon poem Beowulf.

Heaney ascended to a higher tier of renown as his career progressed. He was elected Oxford Professor of Poetry in 1989. In 1995, he won the Nobel Prize for Literature, and he became both a Member of the Royal Irish Academy and Commandeur de l'Ordre des Arts et des Lettres in 1996. The following year, he was elected a Saoi of the Irish arts organization Aosdána. While these accolades piled up, Heaney continued to write and publish poetry prolifically, as well as venturing into prose and poetics: his Finders Keepers: Selected Prose, 1971-2001 won the Truman Capote Award for Literary Criticism.

Heaney’s poetry has the rare distinction of generating equal enthusiasm from critics and the public; in 2008, his works made up two-thirds of the poetry collections sold in the UK. His poems center the local life of Ireland, lovingly connecting its often-contradictory facets into a complex whole: its rich natural beauty, its political struggles and violence, and the echoes of its history in the modern day. In language charged with significance through its sensory weight, Heaney makes use of the personal and mundane to invoke the universal, rendering childhood memories and encounters with the everyday into stories resonant with the sweeping power of myth. Heaney died in 2013 after a fall, inspiring tributes and memorial events around the world.

Text: Heaney’s advice to young people, as excerpted from his many commencement addresses.

An Advancement of Learning