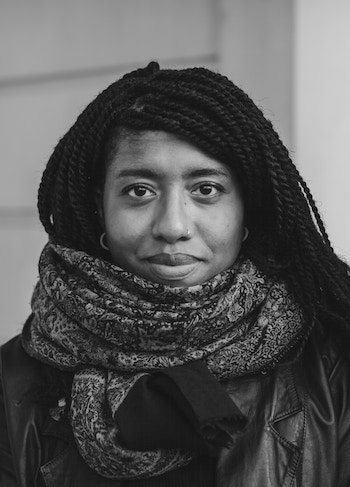 Selina Nwulu was born and raised in Rotherham, South Yorkshire, England, the youngest daughter of Nigerian immigrant parents. Her four older sisters encouraged her to express herself through writing, so she learned at an early age to channel her feelings into poems and short stories, as well as into more intimate diary entries she views in retrospect as poetry. Language became a space for the young Nwulu to develop a voice and self of her own—a necessary outlet for a shy child who often felt out of place in a town with few other Black families.

For Nwulu, writing poetry was initially a private endeavor, rather than her idea of an outward-facing vocation. She studied French and Italian at the University of Leicester’s School of Modern Languages before moving to London in her early twenties, where she began writing poetry more intensively. Nwulu’s interest in activism led her to a cross-disciplinary course held by Platform in which young people were prompted to generate creative output based on issues of social justice. Suddenly, she realized that poetry could be an engine for political change, advocating for social and environmental concerns by connecting with its readers on a deeper, more emotional level than straightforward academic prose. From then on, Nwulu’s twin passions for social policy and poetry would orient her career, often in combination.

Nwulu began working toward her MSc in education and social policy at Birkbeck, University of London, where she later graduated with distinction. She also involved herself with arts and social justice organizations, including the Battersea Arts Centre and the 2014 Women of the World Festival. She continued to write poetry, which soon found its way to audiences: her first book publication was in 2015, in the RSA-commissioned pamphlet 9 Original Poems on Climate Change, where she shared the pages with established poets including John Agard, Ruth Padel, and Alice Oswald. That same year, her debut collection, The Secrets I Let Slip, was published by Burning Eye Books and chosen as a Poetry Book Society recommendation. Just one month later, Nwulu was selected as the 2015–2016 Young Poet Laureate for London, in which role she performed her poetry across London and ran a number of workshops. Her second collection, Who’s Full?, was the product of a 2017 residency with the Wellcome Trust and Free Word Centre. This series of poems explores the way food relates to concepts like social justice, well-being, identity, and memory. Themes of grief, trauma, race, and displacement also frequently appear in her work, which often engages with personal topics to underscore broader political and social issues.

Nwulu has toured nationally and internationally, making appearances at venues such as the Glastonbury Festival, Edinburgh Fringe, and StAnza Poetry Festival, and touring North India with the British Council. Her poetry has been featured in several anthologies, as well as in publications like Vogue, Blavity, i-D, and ES Magazine. In 2019, she was shortlisted for the Brunel International African Poetry Prize. Nwulu is also involved more directly in social, educational, and environmental justice, writing articles published in The Guardian and elsewhere and working as a social researcher and strategist for nonprofits including UN Women, the Equality and Human Rights Commission, Capacity Global, the RSA, and Platform London. Most recently, she served as director of education at Robert F. Kennedy Human Rights UK, and she is currently a founding member of the Resourcing Racial Justice fund.