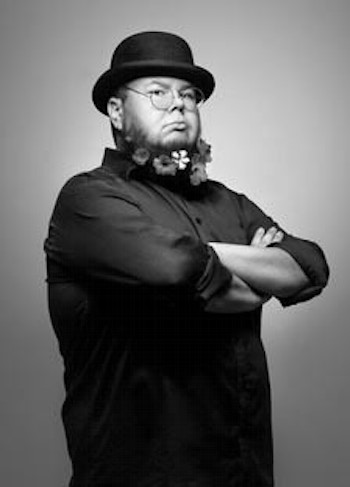 Born in Yellowknife in Canada’s Northwest Territories, spoken-word poet and writer Shane Koyczan is the son of a father of First Nations background and a French mother. He was raised by his grandparents in Penticton, British Columbia, and attended Okanagan College.

In 2000, Koyczan became the first poet based outside of the United States to win the National Poetry Slam Individual Grand Championship. Along with Mighty Mike McGee and C. R. Avery, Koyczan co-founded the music and spoken-word trio Tons of Fun University in 2003. His debut full-length collection, Visiting Hours, was chosen as one of the Best Books of 2005 by the Guardian and the Globe and Mail. His second book, the novel-in-verse Stickboy, was adapted into an opera by Vancouver Opera. In 2010, Koyczan’s poetry was first displayed to global audiences with his presentation of his poem “We Are More” at the opening ceremonies of the Winter Olympics in Vancouver. He released the album Remembrance Year with his band The Short Story Long, as well as the collection Our Deathbeds Will Be Thirsty, in 2012.

In spite of personal struggles around this time that included near-homelessness, Koyczan continued to generate influential poetry and performance, often with a focus on mental health, social justice, and other stigmatized topics. His animated video of his anti-bullying poem “To This Day,” presented at the 2013 TED conference, garnered 25 million views on YouTube and is now used worldwide in classrooms as a teaching tool. On the heels of this success, Koyczan opted to launch his own publishing house, Stickboy Press. The press’ first collection, Koyczan’s own A Bruise on Light, was made possible by a crowdfunding campaign in which 1,688 backers pledged $91,154, setting a Guinness record for the most money raised through crowdfunding for a book of poetry.

A recipient of a BC Civil Liberties Award for the Arts, Koyczan has collaborated with artists including Ani DiFranco, Dan Mangan, and Tanya Tagaq and worked with George Miller on Mad Max: Fury Road. He performed a TED Talk on bullying and created a free anti-bullying smartphone application as part of his To This Day Project. In 2017, Koyczan released the documentary Shut Up and Say Something, a look into his traumatic past and his relationship with his estranged father. The film went on to win Most Popular Documentary at Vancouver International Film Festival. He toured his piece “Shoulders” with David Suzuki for the Blue Dot Tour, part of the eponymous movement to enshrine environmental rights in the Canadian constitution.

Koyczan’s recent publications include two graphic novels, Silence Is a Song I Know All The Words To and Turn On a Light; the poetry collection The Basement in My Attic; and the crossgenre book Inconvenient Skin / nayehtawan wasakay, which explores Canada’s history of residential schools and its treatment of Indigenous people. He lives in Vancouver.

Audio: On NPR's Snap Judgment, Koyczan performs his poem "Turn On the Lights"

A letter to remind myself who I am