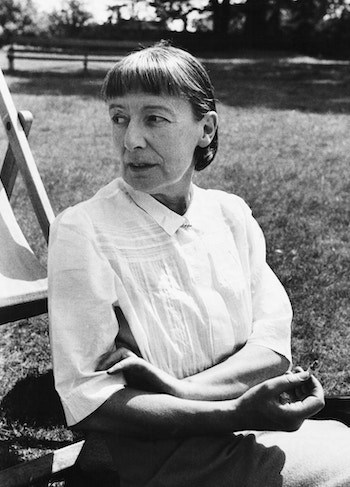 British poet and novelist Stevie Smith was born Florence Margaret Smith in Hull, Yorkshire. When she was three, her father, a shipping agent, left the family to join the merchant navy. She moved with her mother and sister to a house in North London, where they were later joined by her mother’s sister; both Smith and her aunt would live in the house for the rest of their lives. Smith developed tuberculous peritonitis as a child and spent several years in a sanatorium, an experience to which she attributed her poetry’s dark sensibility and concern with mortality.

Smith graduated from the North London Collegiate School for Girls and began working as a private secretary at a newspaper publisher in 1923, a role she would hold for three decades until a nervous breakdown forced her to resign. She published the first of her three novels, Novel on Yellow Paper, in 1936, followed shortly by her debut poetry collection, A Good Time Was Had By All. The book, which also featured her loose, sketch-like drawings, established her as a poet. She would go on to publish eight more poetry collections in her lifetime. A famously shy, sensitive person, Smith nevertheless counted many major cultural figures as friends, including George Orwell and Rosamond Lehmann. She won the Cholmondeley Award for Poets in 1966 and the Queen’s Gold Medal for Poetry in 1969. Smith died of a brain tumor in 1971.

Not Waving but Drowning