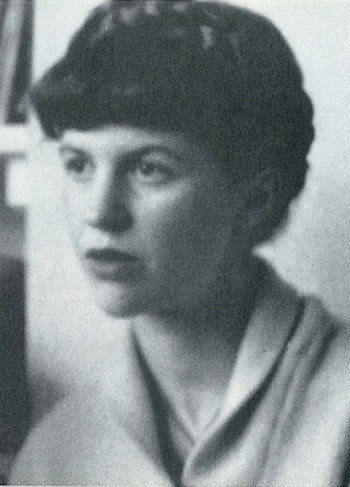 Poet and novelist Sylvia Plath was born in 1932 in Boston, Massachusetts, the eldest of two children. Her father, Otto, was a German immigrant who worked as a biology professor and entomologist; her mother, Aurelia, who had been one of Otto’s graduate school students, was a Massachusetts-raised granddaughter of Austrian immigrants. Plath grew up in seaside towns in the Boston area, with a move to Wellesley after her father died in 1940. She began publishing poems in local periodicals at age eight. Her first nationally published poem appeared in the Christian Science Monitor soon before she began attending Smith College.

While at Smith, Plath was famously given a high-profile summer guest editor position at Mademoiselle in New York City after winning a fiction competition. Soon afterwards, her depression became severe, and she made the first of what would be several suicide attempts throughout her life—a progression documented in her poem “Lady Lazarus.” After six months of inpatient care at McLean Hospital, which included electro-shock treatment, she returned to Smith. These experiences would inspire her later novel The Bell Jar.

Plath received a Fulbright scholarship to Cambridge University after graduating from Smith summa cum laude in 1955. That winter, she met the poet Ted Hughes at a party. The two were married just a few months later and returned to the United States together in 1957. Plath, who was working as a receptionist at a hospital, joined a writing seminar taught by Robert Lowell and attended by Anne Sexton, two early members of the confessional poetry movement. These sessions were formative for Plath. Lowell’s innovative use of his own history with mental illness and psychiatric care to inform his poetry, as well as Sexton’s focus on female experience, helped to shape Plath’s developing voice. The dark, emotional poems she would become best known for, with a primeval force heightened by sonically playful language, were written in this confessional mode.

In 1959, Plath and Hughes moved back to London; the next year, Plath gave birth to their daughter, Frieda, and published her first poetry collection, The Colossus. She had already been published in The New Yorker, Harper’s, and other major literary magazines, but the publication of The Colossus brought her praise and widespread attention, especially in the UK. Plath finished writing The Bell Jar in 1961 and gave birth to a son, Nicholas, in early 1962, soon after the family’s move to a market town in Devon. That summer, she made a second suicide attempt, then learned that Hughes was having an affair with Assia Wevill, a tenant in their London flat. The couple split, and Plath moved back to London with her children, launching into a productive few months during which she wrote much of what would become her posthumous collection Ariel. However, Plath’s depressive episode continued, possibly worsened by the indifferent initial reception of her pseudonymously published The Bell Jar and her isolation with her young children during that brutal winter, known as the Big Freeze of 1963. She committed suicide by carbon monoxide poisoning on February 11, 1963.

Ariel, Plath’s most confessional work, was published in 1965, bringing her to international attention with its violent intensity and exploration of themes of death and loss of identity. Lined up as it was with the burgeoning feminist movement, the collection’s release gave Plath and her suicide near-mythical status. Plath’s Collected Poems won the Pulitzer Prize in 1982, making her the first posthumous winner of the award. She remains widely admired, biographized, and read, a touchstone poet of the 20th century.

Video: A look at Plath’s childhood writings and drawings as collected by NYPL, via Gothamist

Video: From TED-Ed, “Why should you read Sylvia Plath?,” by Iseult Gillespie

Epitaph for Fire and Flower