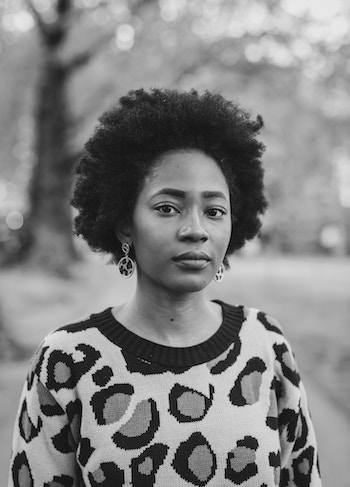 Theresa Lola was born in 1994 in Lagos, Nigeria. Early on, her family encouraged her budding interest in literature, and as a child she was already writing stories, scripts, and diary entries. Her formal introduction to poetry was through a school trip to the Lagos International Poetry Festival at age 12, after which poetry became central to her writing practice. Lola and her family moved to London in 2007. While at the University of Hertfordshire, she saw a poet perform on stage and was inspired to begin performing herself, which she credits with transforming her poetic output.

Upon graduating university with a first-class degree in accounting and finance, Lola was accepted into the 2015–2016 Barbican Young Poets program, which mentors young writers in both written and performed work. While still in her early 20s, Lola began receiving recognition for her poetry: her poem “Portrait of Us as Snow White” was highly commended by judge Andrew Motion in the 2016 Charles Causley Competition, she was shortlisted for the 2016 London Magazine Poetry Prize and the 2017 Bridport Poetry Prize, and she won the 2017 Hammer and Tongue National Slam. She was invited to judge the 2017 Magic Oxygen Poetry Prize ​and 2017 Outspoken Poetry Prize, and to participate in the 2017 Lagos International Poetry Festival—the same festival that inspired her as a child—where she hosted workshops for young African women.

Lola’s writing often incorporates sharp observations on society, particularly on the topics of race, gender, and her city environment. This awareness is seen in her poem “ode to edge control gel,” in which she thanks the titular product for alleviating her shame about the uneven edges of her hair: “You italicise my insecurity so it reads / like sleeked back baby hairs. / […] You / loosened Karma’s buckle on me, reduced the number of / eyes gawking at the naked circle of scalp on my edges.” Characteristically, the poem also explores anxiety and mental health, two frequently stigmatized topics that Lola addresses straightforwardly in her work. Though her more personal poems are kept for the printed page, many of Lola’s poems are written with performance and an audience in mind. Her attention to sound and frequently conversational tone contribute to the power and accessibility of her work in both arenas.

Over the past few years, Lola’s rising star has continued to shine. In 2018, she was joint winner of the 2018 Brunel University International African Poetry Prize. She published her first collection, In Search of Equilibrium, with Nine Arches Press in 2019, and was named the 2019–2020 Young People’s Laureate for London, making her just the third young UK poet given the honor. In this role, Lola has broadened her work in spreading the message of poetry: she facilitates workshops at colleges and universities, and she founded and now maintains #MyMentalHealthJourney, a campaign advocating for poetry writing as an approach to mental wellness.

Video: For National Poetry Day, Lola reads her poem “Despite the Noise.”