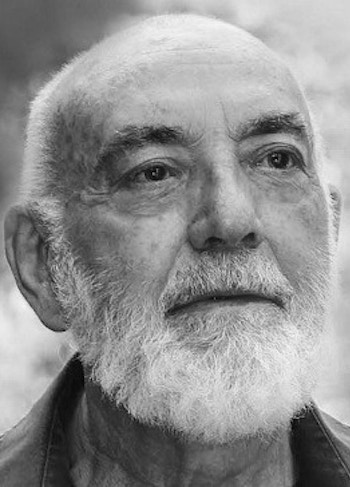 Thomas Kinsella—poet, translator, and editor—was born in the Dublin suburb of Inchicore in 1928. His father was an active socialist and Labour Party member who worked in Guinness’s brewery. Thomas’ younger brother, John Kinsella, became a famed Irish composer and founding member of Aosdána. Kinsella attended Inchicore’s Model School, where classes took place in Irish, and the O’Connell Schools. He received a scholarship to study science at University College Dublin. However, he was drawn to the Irish civil service, so he switched his educational focus to public administration and took on a role in the Department of Finance. Kinsella met his future wife, Eleanor Walsh, in these years; she would become a major force in his creative life, encouraging him to continue his poetry practice even while working and attending school at night.

Kinsella had already had poems published by a college magazine, but it was not until meeting Liam Miller in 1952 that his work found a wider readership. Kinsella’s pamphlet The Starlit Eye—for which the poet himself helped to set the type—became one of the first publications of Miller’s Dolmen Press. The full-length Poems followed, as did Another September (1958), a major collection that won the Guinness Poetry Award, was named a Poetry Book Society selection, and brought him both Irish and English attention. Although the influences of Yeats and Auden are seen in this early work, the collection marked Kinsella as a formidable, original new voice, tackling heavy themes of change and the passing of time under the broader banner of what biographer Thomas H. Jackson calls “the pursuit of order which the poet mounts against loss and decay.”

In the following years, Kinsella continued to publish to increasing acclaim while continuing his work in the Department of Finance. When offered a position as poet-in-residence at the US’s Southern Illinois University, he took it, spending the next three years there. Long interested in translation, Kinsella was awarded a Guggenheim—one of two he received—for his work on the Táin Bó Cúailnge, which he moved back to Ireland to complete. Next, he returned to the US as a professor at Temple University, where he would work for the next two decades, founding its longstanding program of Irish Studies in Dublin. Kinsella split his time between his teaching role in Pennsylvania and a life in Dublin, where he both spent summers and guided the Irish Studies program for one semester each year. During his Dublin months, he also founded and worked on the Peppercanister Press, which he used to print and distribute early versions of poetic works in progress. In these poems, the influence of American modernists such as Ezra Pound and William Carlos Williams can be seen, as well as Kinsella’s interest in Jungian conceptions of dreams and the unconscious.

After founding Peppercanister, Kinsella continued to publish finely printed pamphlets of his own work with the press, which were gathered into full-lengths by major publishers Oxford University Press and Carcanet Press. Wake Forest University Press and Knopf have also published his work. Kinsella’s honors include two Denis Devlin Memorial Awards, the Irish Arts Council Triennial Book Award, and the Freedom of the City of Dublin. He also received honorary doctorates from the University of Turin, the National University of Ireland, and Trinity College Dublin. A longtime resident of Ireland’s County Wicklow, Kinsella passed away in Dublin in December 2021.

Video: A celebration of Kinsella at U Penn's Kelly Writers House