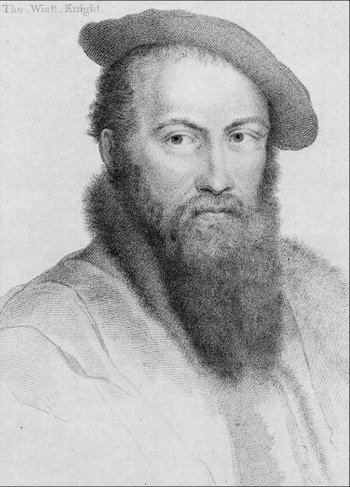 Sir Thomas Wyatt, pioneer of the sonnet and the satire in English, was born in Allington Castle in Kent, England. His father, Sir Henry Wyatt, was an influential privy councilor in the courts of both Henry VII and Henry VIII. Wyatt attended Cambridge, likely at Saint John’s College, and married Elizabeth Brooke, daughter of Thomas, Lord Cobham, in 1520. In 1521, his oldest son, Sir Thomas Wyatt the Younger, was born; after his father’s death, he would go on to lead the uprising against Queen Mary I termed Wyatt’s Rebellion.

Wyatt played many roles other than that of poet in his short life. He was appointed to Henry VIII’s court in 1524 as esquire of the king’s body and clerk of the king’s jewels. A natural charmer with a knack for languages, he went on to serve as a diplomat and ambassador in France, Spain, and Rome. He handled sensitive missions on the king’s behalf with powerful figures like Emperor Charles V and Pope Clement VII, at one point being captured by Charles’ imperial troops and ransomed. While at home in England, lived the life of a courtier, jousting, joking, and flirting along with the rest of the notorious king’s court.

Wyatt and his wife separated soon after the birth of his son, possibly due to infidelity on her part. His most lasting romantic relationship was with Elizabeth Darrell, his mistress of many years with whom he had a child, Francis, out of wedlock. However, he was rumored to have had a love affair with Anne Boleyn before her marriage to Henry, a conjecture reinforced by the interpretation of poems like “If waker care” and “Whoso List to Hunt.” When Henry famously moved to behead Anne, he imprisoned Wyatt, perhaps hoping to extract incriminating information about their affair to further validate the execution. However, Wyatt was released due to the efforts of his patron, Thomas Cromwell. Within a few years, he was back in Henry’s favor—a cycle that repeated when he was imprisoned again on old allegations in 1541, only to be made a member of Parliament in 1542, just months before his early death by fever.

During his years abroad, Wyatt encountered Continental poetic forms like the rondeau, the sonnet, and terza rima and composed English-language poetry in these forms for the first time. The rhyme scheme he adapted from the Petrarchan sonnet planted the seeds for what would become the archetypal Shakespearean sonnet form. Much of his poetry was written for the private audiences of court and hence both evoked the romances and satirized the excesses of courtiers during Henry’s reign. His innovations in form and singular combination of Chaucerian and continental styles have earned him posthumous praise as one of sixteenth-century England’s great poets.

Video: A guide at Montacute House discusses Wyatt's portrait and his history

Text: Damion Searls explores the use of the word "deserve" in "They Flee from Me" at Paris Review

They Flee from Me