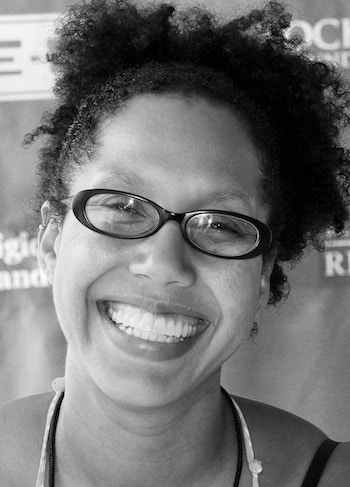 Tiphanie Yanique, highly lauded for her writing across genres, was born in the U.S. Virgin Islands. She was raised in a house full of books in Saint Thomas by her grandfather and librarian grandmother, the latter of whom frequently recited poetry and encouraged Yanique’s copious childhood jottings. Her early literary influences included Caribbean fiction writers like Gabriel Garcia Marquez and Jamaica Kincaid, as well as poets Sylvia Plath and Gwendolyn Brooks. Yanique is a fifth-generation denizen of the Virgin Islands, an unincorporated U.S. territory with a complex history of indigenous habitation, colonization by multiple nations, slavery and exploitation, and intermingling of cultures and ethnic groups from elsewhere in the Caribbean and far beyond. Early on, the young writer felt a responsibility to her and her family’s homeplace, paying homage to it in her writing via questions of identity and belonging and the use of Caribbean myths, grammars, and painstakingly researched history.

For her undergraduate degree, Yanique attended Tufts University in Massachusetts, where her writing skill in multiple genres was already notable: she won both the 2000 Academy of American Poets Prize and the Mary Grant Charles Prize for fiction. After graduating, she received a dual-country Fulbright scholarship and spent time researching Caribbean female fiction writers in Jamaica and Trinidad and Tobago while teaching at her old high school on the side. In 2006, Yanique received her MFA in creative writing from the University of Houston, where she studied with Claudia Rankine. Yanique had already begun work on what would be her first novel and poetry collection—both projects written, edited, and honed over more than a decade.

Yanique’s debut short story collection, How to Escape a Leper Colony (Graywolf, 2010), earned her a spot on the National Book Foundation’s prestigious “5 Under 35” list. In 2012, I Am the Virgin Islands, a children’s picture book consisting of a poem by Yanique and images by her husband, the photographer Moses Djeli, was published by Little Bell Caribbean after being commissioned by the First Lady of the Virgin Islands. Her first novel, Land of Love and Drowning (Riverhead Books, 2014), a multi-generational epic of the Virgin Islands, won the Flaherty-Dunnan Center for Fiction Prize for a first novel, the Phillis Wheatley Award for Pan-African Literature, and a Rosenthal Family Foundation Award from the American Academy of Arts and Letters. It was also listed by NPR as one of the Best Books of 2014. Her poetry collection Wife (Peepal Tree Press, 2015) was awarded the Forward Arts Foundation’s Felix Dennis Prize for Best First Collection and the Bocas Prize for Caribbean Poetry. Wife

Yanique’s writing has been published in the New York Times, Pleiades, Best African American Fiction, Wall Street Journal, and many other publications. She has held roles at multiple literary magazines and been awarded residencies at Bread Loaf, Squaw Valley, and elsewhere. She was listed by the Boston Globe as one of the sixteen cultural figures to watch out for. Yanique taught at Drew University and the New School before becoming Director of the Creative Writing Program at Wesleyan University. She is currently an associate professor of English and creative writing at Emory University and lives in Atlanta, Georgia, with her husband and three children. Her next book, Monster in the Middle: Fictions, is forthcoming from Riverhead.