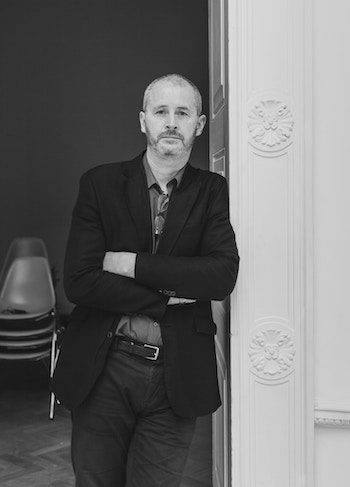 Tom French was born in 1966 in Kilkenny, Ireland, and raised in a village in nearby County Tipperary. He and his siblings spent the cold months at boarding school and summer holidays working farms and saving turf from the bog. French was educated at the National University of Ireland in Galway and the University of Limerick, receiving a degree in European Studies. Although he read poetry while at school, he hadn’t yet considered that he himself could write; it was the death of his brother when French was just 20 that prompted him to write his own poems for the first time.

French lived internationally for a while before settling back down in Ireland, working at various jobs in France, Spain, and the United States, from dairy farmer to English teacher. A suggestion from poet Anne Kennedy motivated French to turn more serious attention to his writing. His career in literature began to gain momentum at the turn of the century: he received his first bursary from the Arts Council/An Chomhairle Ealaíon in 1999, which would be followed by another in 2009, and won the inaugural Ted McNulty Poetry Prize. French’s first collection, Touching the Bones, was published by Gallery Press in 2001 and won the 2002 Forward Poetry Prize for Best First Collection, making French the first Irish winner of the prize.

Since his debut, French has published five more collections with Gallery Press: The Fire Step (2009); Midnightstown (2014); The Way to Work (2016); The Last Straw (2018), which was shortlisted for the Irish Times/Poetry Now Award); and, most recently, The Sea Field (2020). He has also published two e-chapbooks with digital publisher Smithereens Press, The Night Ahead (2013) and Taking the Oath (2015). He also edited the local poetry anthology A Meath Anthology (Meath County Library Service, 2010). His poem “West” won the Dermot Healy International Poetry Prize in 2015, and in 2016, he was awarded the Lawrence O’Shaughnessy Award for Poetry. He has been featured repeatedly on RTÉ and at the Cúirt Literature Festival and has appeared in publications including The Irish Times and Poetry Ireland.

French’s connection to Ireland’s geography, history, and culture thrums through much of his work. His poems often nostalgically evoke the agricultural lifestyle that has faded from the Irish landscape in many places, which is seen with a detached yet compassionate eye. Historic figures and events, local landmarks and place-names, and scenes of cutting turf and farm life recur in his oeuvre, as do considerations of more personal history, from death and loss to childhood memories.

French works as a librarian in the Local Studies Department of the County Meath library service, a role he has held for many years. He lives near the coast in County Meath with his wife and family.

Audio/Text: French’s address to young poets at the 2016 “A Poem for Ireland” competition

Video: French reads from his 2018 collection The Last Straw at Kennys Bookshelf