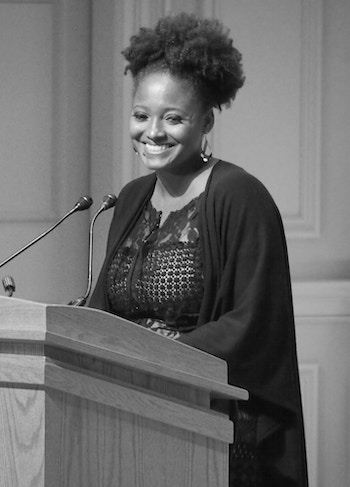 Poet and educator Tracy K. Smith was born in Falmouth, Massachusetts, and raised in the Northern California town of Fairfield. She earned a BA from Harvard University, where she was a member of the Dark Room Collective, and an MFA in creative writing from Columbia University. Smith’s first poetry collection, The Body's Question (2003), won the Cave Canem prize for the best first book by a Black poet; her follow-up, Duende (2007), won the James Laughlin Award and the Essence Literary Award. Life on Mars (2011) earned Smith the Pulitzer Prize for Poetry. Her other works include Wade in the Water (2018), winner of the Anisfield-Wolf Book Award; the memoir Ordinary Light (2015), a finalist for the National Book Award in nonfiction and a New York Times and Washington Post notable book; and American Journal: Fifty Poems for Our Time (2018), an anthology she edited for Graywolf Press.

Smith was named United States Poet Laureate in 2017—a role she held for two terms—and a Chancellor of the Academy of American Poets in 2021. Her other honors include a Wallace Stegner Fellowship at Stanford University, fellowships from Breadloaf and the Academy of American Poets, a Rona Jaffe Writers Award, a Ludwig Vogelstein Foundation grant, and a Whiting Award. She teaches creative writing at Princeton University, where she is Chair of the Lewis Center for the Arts, and hosts the Poetry Foundation–sponsored podcast and radio show The Slowdown from American Public Media. Smith’s fifth collection, Such Color: New and Selected Poems, is forthcoming from Graywolf Press in October 2021. She lives in New Jersey.